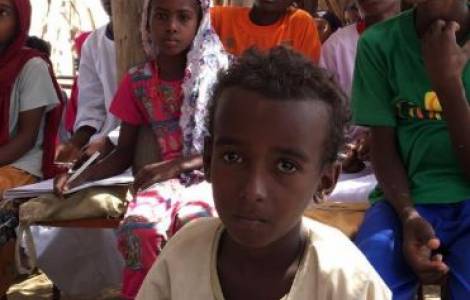 Hebo (Agenzia Fides) - They have been close to children for 73 years. They feed them, dress them, help them grow and then place them in the community of origin. Since 1947, in Eritrea, the Vincentian fathers (Lazarist missionaries), together with the Daughters of Charity, have never stopped being close to the little ones, especially the poorest and most forgotten ones. Without asking for anything in return, on the contrary, respecting their cultures and traditions.
The Lazarist fathers arrive in what is then called Abyssinia in 1839 in the footsteps of the preaching of St Justin de Jacobis. They create structures, they help poor people. Then a French religious is appointed to lead the congregation. The Italian colonial authorities fear that the religious can work in favor of France, at the time an enemy power. Lazarists are thus forced to leave Eritrea, but their memory does not fade, nor does the bond between the congregation and the small country. In the 1930s, when the war against Ethiopia broke out, numerous Lazarists were called to serve as chaplains in the Italian army. A relationship with Eritrea is strenghtned again.
At the end of the Second World War, some of them decided not to return to Italy. "The situation in the Country is delicate - Joseph Zeracristos, Eritrean Lazarist explains to Fides - people are very poor. Many mothers die during childbirth and children are left alone. In 1947, together with the Daughters of Charity, they decided to take care of these little ones. The first four babies are welcomed on the first floor of their community".
This is how the "Lifesaving" project began which has never stopped since. "Eritrea is a small and proud nation, but also a very poor one - continues Father Zeracristos -. Over time, unfortunately, the health situation has not improved. With the exception of a short period in the 1990s, after the end of the civil war, in which the government created many health facilities, the condition of mothers has always been very precarious".
The men and women religious continue to welcome in their structure in Hebo (the city where the sanctuary dedicated to St Justin de Jacobis stands) between 38 and 45 children every year. Initially they looked after them up to the age of 18, then the decision to take care of them up to the age of 6 and reintroduce them to their communities. "Children of Orthodox, Muslim and Catholic families arrive - continues Father Lazzarista -, we host them all, but we have always respected their culture and their faith. If they are Muslims we do not baptize them, if they are Orthodox we respect and accompany their confession of faith. Once reinserted in their communities, relatives will take care of forming them to their faith".
Every year, during the feast of St Justin de Jacobis (30 July), many fathers and children return to Hebo, to thank the Lazarist fathers for the support given to them. But what is the secret of this long-lived project? "There are many elements - Father Zeracristos concludes -. Meanwhile, I would say that it is not the project of a single missionary, but of our entire Eritrean Lazarist community. Since 1947, the community has taken charge of it and carried it forward. Secondly, I would say that the generosity of many Italians is important, who through remote support help us look after the little ones. We will never abandon the little ones. We will be close to them helping them to grow and become good citizens" . (EC) (Agenzia Fides, 29/5/2020)

ASIA/IRAQ - In Mosul, young Muslims restore the church of Mar Toma. But the "return" of Christians remains weak

AMERICA/BOLIVIA - All Saints' Day: Eucharistic Adoration and Concert "for a missionary Church"