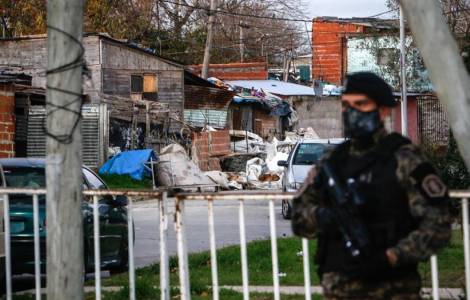 2020-06-17
"We are all Amazon": Mgr. Ojea calls for anti-Covid emergency measures also for the inhabitants of the Amazon

2020-05-27
"Affirming certainties and strengthening commitments": Mgr. Lozano at the Te Deum for the 210 years of independence

2020-05-23
In isolation, the media have opened up new mission paths: social communications Day

San Juan de Cuyo (Agenzia Fides) - Argentina celebrated the national holiday on May 25th. In the Cathedral of San Juan Bautista, the Archbishop of San Juan de Cuyo, Mgr. Jorge Lozano, presided over the traditional Te Deum of 25 May, 210 years of independence. At the beginning of his homily, he said: "210 years have passed since the first cry for freedom in our land". "Due to isolation it is not possible to celebrate the popular feast", but "we can pray and thank God for our Fatherland".
In the note sent to Fides, Mgr. Lozano referred to the situation of the pandemic, which "has caused the fall of many false securities in the world. Situations in which many now live with fear, with anguish. Many of us have seen our plans changed, both at a personal and community level. Life has changed and we have realized that we are fragile and vulnerable. We had to stop the planned activities and we had to deal with others that we had not even imagined", he reflected.
Then he compared the current situation with a sun eclipse: "In the eclipse, we do not see the sun, but we know it is there. In this phenomenon, all we can do is wait for the passage of the eclipse and the return of light". The Archbishop of San Juan de Cuyo made two proposals: "affirm certainties and strengthen commitments".
But "what certainties do we have?" he highlighted. "God created us out of love, we need brothers, nobody should feel alone. We thank God for life and in each of our fellow men we recognize that we are the image and likeness of God, that we are brothers. We must not forget this certainty, because "nobody can save himself alone", as the Pope said.
Mgr. Lozano invited "to recognize that God is present in the poor, the sick, the forgotten, whom nobody thinks about. He is also present in those who assist, in healthcare personnel, in those who organize solidarity, in those who have public responsibilities".
In Argentina there are 13,300 positive covid 19 cases confirmed and so far 490 deaths have been registered. Although the figure is lower than that of other Latin American countries, Argentina experiences moments of anguish to see coronavirus outbreaks reappear in some very popular and poor areas. 2 days ago Villa Azul, a popular neighborhood on the outskirts of Buenos Aires, was literally closed with metal bars so as not to let people out or enter this neighborhood, to stop the virus from spreading. (CE) (Agenzia Fides, 27/5/2020)