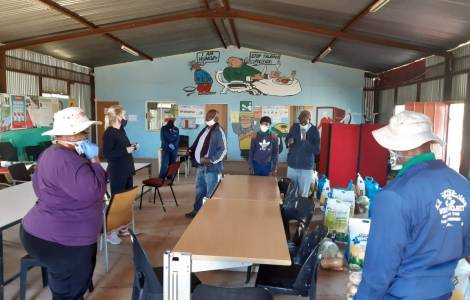 2020-04-22
Lockdown for Covid-19, the Scalabrinians: "Poor and immigrants without livelihood"

AFRICA/SOUTH AFRICA - "PMS Covid-19 Emergency Fund, precious help for local communities" says PMS National Director
Johannesburg (Agenzia Fides) - "Though the Faith has taken root and is well formed in segment of the Catholic population, the closing of Churches and suspension of all Eucharistic and other liturgical services for the public has made it very clear that the Faithful have in many cases not been adequately instructed and formed in their Faith. A large number of the Faithful are lost now that there is no one there to direct and guide them", says to Agenzia Fides, Fr. Gordon Paul Rees, National Director of the PMS (Pontifical Mission Societies) of South Africa, in describing the impact of the containment measures of the Covid-19 pandemic on the Church in the Country.
"Many people are not mature Catholic Christians able to take responsibility for their own spiritual growth, even if various Bishops and Religious Institutions, like the Jesuit Institute, have been encouraging the faithful, helping them to place this experience within a wider religious context of the suffering people of God", adds Fr. Rees.
Various Church activities have continued through the various means of social media, but the PMS National Director stresses that "this pandemic has laid bare the discrepancies between the privileged and the underprivileged once again. Those with access to social media could benefit from the Church’s continued Mission, while the rest were excluded". "Where permitted, the social mission of the Church, like feeding the hungry, continued", explains Fr. Rees. "In some places these very bodies were deliberately impeded from doing their work", said Fr. Rees, who describes a dramatic situation: "The Church has always played an important role in caring for the poorest, the migrants,undocumented (illegal) refugees; with the announcing of the Lockdown the sad reality is that the Government’s so called Feeding Schemes are not reaching the majority who live from hand to mouth. Moreover, no real provision is made for those who are without documents: refugees, migrants and the homeless".
"Numerous government officials have been caught stealing the food parcels, only giving to those who support the Party or even trying to sell them. NGO’s have in many cases been stopped and even people arrested for distributing food as the Government insists that they alone can distribute. In some places Church based Organisations and NGO’s are able to distribute food to the needy", says Fr. Rees.
"A number of Dioceses have requested help from the PMS Covid-19 Emergency Fund. The first few requests related to dealing with the humanitarian crisis that is unfolding before our eyes, where people are starving due to the fact that they are forced to stay at home and where Government Feeding and Relief Packages are not forthcoming", says Fr. Rees who describes some charitable initiatives of the Church: "The Diocese of Polokwane with the generosity of some of the Faithful have been able to make up some food parcels and distribute these to the most needy people in the area.
In the Parish of Orange Farm, outside Johannesburg, the Comboni Missionaries received help from some Catholic individuals from Johannesburg, and therefore could continue the charitable work they do in feeding the hungry.
The Diocese of Rustenburg was able to give some help to destitute people, undocumented refugees and migrants in the area with the help of a Caritas project, 250 food hampers and 250 bags of maize meal were distributed.
The Denis Hurley Centre (a Catholic Foundation named after the Late Archbishop Denis Hurley), have been working hard to help the homeless and the poor during the Lockdown. The building itself is housing 100 elderly, disabled and sick people. Finally, the Nunciature has also taken the initiative to help the needy in these very trying times making a significant amount of money available for the distribution of food parcels. (L.M.) (Agenzia Fides, 23/5/2020)