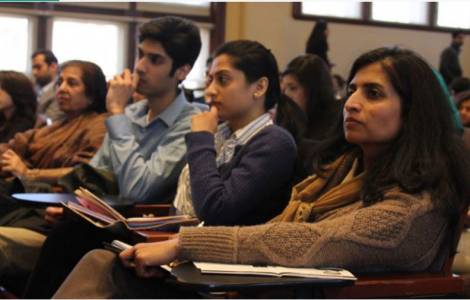 2020-05-15
Religious leaders gathered in prayer and fasting: "God free us from the pandemic"

Lahore (Agenzia Fides) - Religious minorities in Pakistan appreciate the measure approved by the government of the Punjab province which sets a 2% quota for students enrolled in universities, reserved for religious minority students. Before the end of the last government, the former minister of higher education in Punjab, Syed Raza Ali Gillani, had formed a committee to decide on the introduction of a quota of enrolled students reserved for non-Muslim students, but representatives of public universities had opposed. Now the measure has been approved and announced by the Prime Minister of Punjab, Usman Buzdar, of the "Pakistan Tehreek-e-Insaf" (PTI), the party currently in the federal government in Pakistan, with its leader Imran Khan.
"This is extremely good news. Punjab is the largest province in Pakistan by population, territory and political importance. As a result, we hope other provincial governments will approve the same measure", said Shireen Aslam, member of the Committee for human rights in the Attock district.
Christians are the largest group among the religious minorities in the Punjab province, with about three million baptized. But very few young Christians and Hindus continue their university education and this continues to perpetuate that gap that sees poorly educated non-Muslim citizens and therefore engaged in low-end jobs (street cleaners, sewer cleaners, labourers, etc. ).
In this situation, the approved measure has the potential effect of a positive shock: in a note sent to Fides, a Forum of civil society associations welcomes the measure, noting that it is the responsibility of the State to promote the development and education of minorities. "The government has done its part, now it is up to the citizens of the minorities themselves to exploit the benefits of this provision; even if the main obstacle to applying it will be the heads of the universities, who could refuse to comply with the law".
"It is an important moment of reflection and action for Christians in Pakistan. New educational opportunities are opening up. This decision deserves special attention from the State, governments, religious and political leadership so that we can grasp a favorable opportunity and derive concrete benefits from. The federal government should take up and apply this decision in the form of a parliamentary act", notes the Forum. Christian professor and researcher Sabir Michael, from the Department of Social Work at the University of Karachi, points out to Fides that "the measure, also valid in fields such as medicine, law and engineering, is going to fill an existing gap. There has been an educational decline of minorities in recent decades, and human rights activists have put pressure for special measures to be taken for the socio-economic-cultural emancipation of religious minorities. In Pakistan, affirmative actions should be taken based on the theory of 'positive discrimination', in order to face and decrease the margins of the weakest sectors of society".
Ayra Indrias Patras, member of the national delegation for minorities in Pakistan, who has strongly promoted the provision with advocacy and social and political awareness campaigns, is satisfied: "If implemented - he says to Fides - this provision will guarantee students of disadvantaged communities access to university education institutions and will promote inclusion and pluralism in society". (KN-PA) (Agenzia Fides, 22/5/2020)

AFRICA - Covid-19 and Gospel of charity in Africa

EUROPE/SWITZERLAND - Forum on mission today at the University of Friborg, on the occasion of the Extraordinary Missionary Month