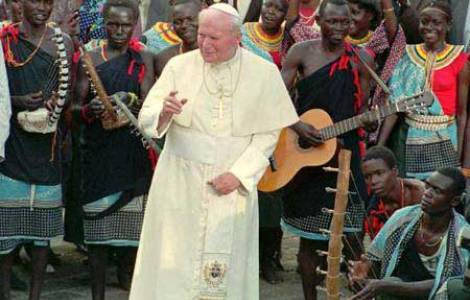 Vatican City (Agenzia Fides) - While World Mission Day was celebrated around the world, on Sunday 22 October 1978, the new Pope, John Paul II, began his ministry as universal Pastor in St. Peter's Square with a vigorous exhortation which was the emblem of his pontificate: "Open, indeed open the doors to Christ!". The Archbishop of Krakow, Cardinal Karol Wojtyla (1920-2005), was elected Peter's successor on October 16.
The circumstance of the beginning of the Petrine ministry was highlighted by the Pontiff himself in his first Message for World Mission Day, June 14, 1979, in which he recalled the "happy coincidence": "I could not omit, among the primary intentions ardent in my mind on that solemn circumstance, reference to the problem, always a topical and urgent one, of the spread of the Kingdom of God among non-Christian peoples".
Beatified by Benedict XVI on May 1, 2011 and canonized by Pope Francis on April 27, 2014, St. John Paul II was called "the itinerant Pope, the missionary Pope, the evangelizing Pope". Pope Francis, during the celebration of this morning’s mass in the Vatican Basilica from the altar that guards his mortal remains, on the centenary of the birth of Karol Wojtyla, underlined his missionary anxiety, calling him "man of proximity". "He was not a man detached from the people - said Pope Francis - indeed he went to visit the people and traveled the whole world, finding his people, looking for his people, getting close. And closeness is one of the traits of God with his people ... A closeness of God with the people who then tightens in Jesus, becomes strong in Jesus. A shepherd is close to the people, on the contrary he is not a shepherd, he is a hierarch, is an administrator, perhaps good but not a pastor. Proximity to the people. And Saint John Paul II gave us the example of this closeness: he made himself close to the grown-ups and the little ones, to the near and far, always close".
His intense 26 years of pontificate, between the twentieth and twenty-first centuries, were entirely characterized by a strong missionary connotation expressed in a thousand ways, starting with the messages for the annual Missionary Day, which had as their guiding thread the invitation to the co-responsibility of all the components of the Church to the work of evangelization of the world, underlining the central role played by the Pontifical Mission Societies for missionary animation and cooperation.
His rich Magisterium unequivocally marked the history of the mission, opening new paths, indicating new goals. His main legacy remains the Encyclical "Redemptoris Missio" (1990), on the perennial validity of the missionary mandate, defined as the Magna Carta of the mission of the third millennium. In 1995 John Paul II dedicated a cycle of 9 catecheses during the general audience on Wednesday, to the fundamental and essential elements of the mission of the Church, to the cornerstones on which it is based, as well as to the new challenges of the mission and to the questions related to the growing commitment for ecumenism. All his documents, from the apostolic exhortations to the meetings with the Bishops for the ad limina visit, to the homilies, are woven from the invitation to proclaim the risen Lord, not to withdraw from the announcement, not to let oneself be overcome by discouragement and pessimism . For the first time in the history of the Church, he convened special Assemblies of the Synod of Bishops dedicated to analyzing and studying the situation of evangelization in the different continents, bringing together the Episcopates of Africa, Asia, America, Oceania, Europe in Rome.
His 104 international journeys stand out in this ministry, in imitation of the Apostle Paul, with whom he reached the missionary communities scattered throughout the world, even the most geographically and numerically small ones, always taking care to meet not only sovereigns and Heads of State, but above all the poor, the sick, the elderly, prisoners, the handicapped and those who are generally placed on the margins of society, as "a Pastor close to the people, close to the big and small", said Pope Francis. (SL) (Agenzia Fides, 18/5/2020)