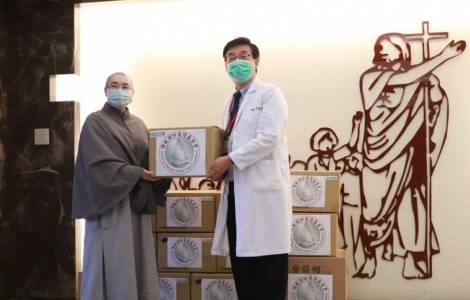 Taipei (Agenzia Fides) - "The Covid-19 pandemic was immediately an opportunity for solidarity, given that the Taiwanese are an open, generous and supportive population", says to Agenzia Fides Fr. Raphael Lin Zhiding, Chaplain at the "FuJen Catholic University" in Taipei, a university attended by over 27 thousand students, mostly non-Catholics. "In particular - says the priest - there was an abundant flow of donations to Italy: an Italian missionary in Taiwan, Father Giuseppe Didone, of the Order of Ministers of the Sick (Camillians), launched a public appeal, recalling that Italian priests have been helping the people of Taiwan with dedication for decades, since times when they were very poor. A race of solidarity towards Italy, therefore, took place as a sign of gratitude for what the Camillians have done in 60 years of its presence in that country". The Italian Camillians helped build hospitals and clinics in Yilan County after the Second World War. Now the inhabitants of Yilan, in eastern Taiwan, brought donations to Luodong St. Mary's Hospital, contributing with more than 4.8 million euros, a way to show their gratitude: the funds are used to purchase essential medical equipment in areas affected by Covid-19 in Italy.
As a result of the magnificent momentum of solidarity, Taiwan donated 480 thousand face masks delivered to the Vatican and the Italian Catholic Bishops’ Conference, and to religious communities thanks to the collection made by public and private donors. The Taiwanese authorities, numerous organizations and private citizens wanted to help the Holy See and the Italian Church in the fight against the pandemic. The face masks were destined to the Vatican, three Roman hospitals (Ospedale Bambino Gesù, Policlinico Gemelli and Campus biomedico), and various religious and health facilities in Northern Italy. In addition, donations of food and protective material were made and handed over to various religious congregations that are particularly busy alongside the sick and there will be other initiatives of this kind in the future.
The Chaplain continues: "Taiwan has been successful in the fight against this virus. This happened because the civil authorities reacted immediately and efficiently, taking all the necessary measures, such as carrying out swabs to the whole population, isolating positive cases, treating the infected", he underlines, describing a situation that currently sees zero contagion and only one person infected, who arrived from abroad. "Salvatorian missionaries and other religious orders - continues Father Lin - also collected and sent aid. We must also remember the campaign launched by the young people of the Focolare Movement in Taiwan, in favor of a country like Mexico, after the experience of one of them in the American country. The Taiwanese have a warm heart that have shown kindness and charity".
The spiritual dimension, notes Fr. Lin, is very important in Taiwan where, out of about 23 million inhabitants, Christians account for 3.9% of the population, compared to a majority of Buddhists (35%) and Taoists (33%): "Religious communities give proof of mutual help and unity. In the present crisis, faith communities develop good relationships, in the common spirit of compassion and mercy towards those in distress or suffering".
With regards to the life of the small Taiwanese Church, which is about 1% of the population, the Chaplain observes: "The pastoral activities were suspended for a while but last Sunday we received the good news of the resumption of Holy Masses and liturgical celebrations with the people. Of course there is a strict observance of health protocols such as the use of face masks, the sanitization of environments, washing hands, social distancing. The baptized, in this difficult moment, have never lost hope, faith, charity". (PA) (Agenzia Fides, 16/5/2020) 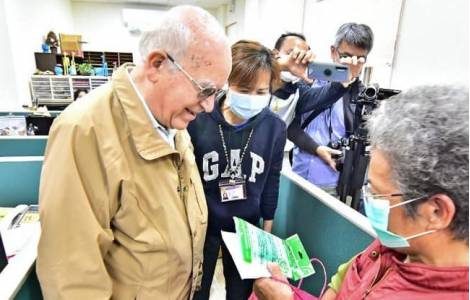 AMERICA/PERU - Covid-19, the Salesians close to the last through concrete gestures of solidarity"

EUROPE/ITALY - Today, like yesterday: the Camillians at the forefront of the Covid-19 emergency

AFRICA/NIGER - The cross completed eliminated, symbol of the parish of Fr. Maccalli