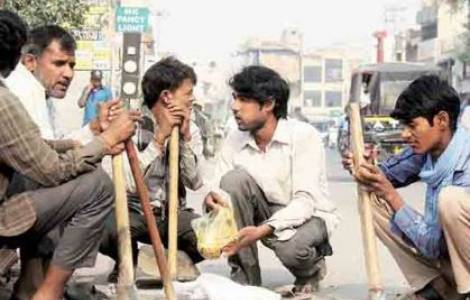 New Delhi (Agenza Fides) - In some states of India there are measures that extend working hours and suspend the minimum wages, in the midst of the coronavirus crisis, increasing the phenomenon of "slave labor", or what becomes a form of slavery, exploitation and abuse of human dignity. This is the alarm raised by Church leaders, human rights activists and Indian civil society organizations. Father Jaison Vadassery, Secretary of the Commission for Migrants of the Conference of Catholic Bishops of India (CCBI), tells Fides that "national and state governments do not pay enough attention to workers' issues". Work shifts in six Indian states were extended from 8 to 12 hours a day over a three-month period.
"The revitalization of the economy or the containment of losses due to the pandemic must not be at the expense of workers, migrants and the poor", said the priest, who in the past was also Secretary of the Indian Bishops' employment office.
Union leaders from different organizations say that several state governments have given companies "green light" to exploit workers. "Modifying the existing rules to satisfy certain commercial and profit interests can increase slavery and trigger social conflicts", pointed out Lenin Raghuvanshi, who formed a Supervisory Committee on the Human Rights of Workers. The leader expresses great "anguish" that workers are asked to work longer hours during the lockdown and are denied permission to go home".
Akhtar Khan, a construction worker in the state of Chhatigargh, tells Fides that "it is inhumane to force workers to work for 12 hours without paying other benefits. It becomes a matter of slavery endorsed by the government and employers".
Several States have adopted "new overtime provisions instead of suspending labor laws", as an escamotage", explains Raghuvanshi, a well-known human rights activist. A forum of academics and unions has announced that at least six states are planning to suspend labor laws to help the industry recover from the seven-week coronavirus lockdown, in force until May 17 and likely to be extended. The lockdown has affected millions of workers and migrants stranded in various parts of the country, impacting the livelihoods of millions of workers.
According to experts from the world of work, the decision to suspend federal and state laws that sanction workers' rights would push even more people into the sector of informal economy, of undeclared work, with the effect of reducing wages and further eroding the conditions of job safety and dignity. According to some sources, various states, in order to incentivize the economy after the losses related to Covid-19, intend to suspend the legislation that guarantees minimum wages and the formation of workers' unions for a period of three years. Social security measures, including social security funds or provisions for the health and safety of working women, would be revoked.
These interventions, it is said, will help local industries to recover and reverse the trend of losses suffered, as well as be useful in attracting new investments.
"The change in labor laws would be a regression", said K.R labor economist Shyam Sundar, a professor at the Xavier School of Management, run by the Indian Jesuits.
Over 90% of the workforce out of 450 million Indians work in the informal sector with low wages and without social security. These workers have been hit hard by the closure of factories, construction sites and other workplaces.
India has eight million "modern slaves", according to the "Global Free Slavery Index", developed by an NGO based in Australia, and forced labor is the most common form of slavery in the country. (SD-PA) (Agenzia Fides, 14/5/2020)