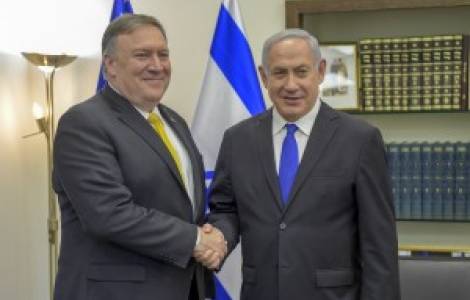 2020-07-07
Heads of the Churches of Jerusalem: "radical groups" threaten the Christian presence in the Holy City

2020-05-13
Ecumenical bodies to the EU: say no to the illegal annexation of Palestinian territories

Jerusalem (Agenzia Fides) - The European Union cannot make itself "complicit" in the illegal annexation of Palestinian territories announced by the next Israeli government, and must ensure that any such annexation is met with real consequences, at least commensurate with those adopted by the EU in response to Russia’s annexation of Crimea. This is what is written in an appeal letter issued by the leaders of the World Council of Churches (WCC) and the Middle East Council of Churches (MECC).
The letter is jointly signed by Lebanese professor Souraya Bechealany, Secretary General of MECC, and by Romanian theologian Ioan Sauca, interim Secretary General of the WCC. The appeal is addressed to Josep Borrell, High Representative of the Union for Foreign Affairs and Security Policy, and to the foreign ministers of all the countries that are part of the EU, and who should face the issue of the potential Israeli annexation of Palestinian territories together on Friday 15 May.
Any such annexation of the West Bank - the signatories of the appeal write - would constitute a grave violation of international law. The appeal cites recent statements by Nickolay Mladenov, the United Nations special coordinator for the Middle East peace process, according to whom Israel's unilateral annexation of additional Palestinian territories "would deal a devastating blow" to the two-state solution, lose the door to a renewal of negotiations, and threaten efforts to advance regional peace.
The appeal also mentions Michael Lynk, UN Special Rapporteur on the situation of human rights in the Palestinian territories occupied since 1967, who says that the that the looming annexation is "a political litmus test for the international community", and that it "will not be reversed through rebukes".
High Representative Josep Borrell, also mentioned in the appeal, has already stated that the EU does not recognize Israeli sovereignty over the Palestinian territory and that it will continue to closely monitor the situation and its broader implications, and will act accordingly. Accordingly, the WCC and the MECC are calling on the EU to ensure that any such annexation is met with real consequences, at least commensurate with those adopted by the EU in response to Russia’s annexation of Crimea, underline that further unilateral Israeli annexation of territories, the EU must surely suspend the EU-Israel Association Agreement. "The unilateral annexation of yet more of the territory that remains to Palestinians - reads the final part of the appeal - cannot lead to justice or to peace, but only to greater injustice, dispossession, escalating tensions, regional destabilization, and the further erosion of respect for international law. The EU must not be complicit – by inaction or inadequate reaction – in this outcome".
Meanwhile, today, May 13, exactly 72 years after the declaration of the institution of the State of Israel, the new Israeli government led by Benyamin Netanyahu sees the light. The inauguration ceremony takes place in the presence of US Secretary of State Mike Pompeo. Born on the wave of the coronavirus emergency, the new executive according to several analysts the new executive has among its objectives to extend Israeli sovereignty to 30 percent of the West Bank from next July, with a law that Netanyahu is preparing to present to the Knesset, and which would should be approved without problems thanks to the support of the "White and Blue" Party of Benjamin Gantz and that of the Labor Party (political formations both part of the new government). (GV) Agenzia Fides, 13/5/2020)