AMERICA/CHILE - Our pilgrim Lady of Fatima in the dioceses, May 13 celebration in streaming from the Shrine of Maipù 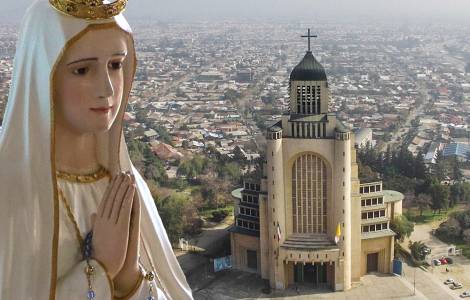 Santiago (Agenzia Fides) – Wednesday, 13 May, feast of Our Lady of Fatima, Mgr. Cristián Roncagliolo, Auxiliary Bishop of Santiago, will preside the prayer of the Holy Rosary, the Mass and the act of Consecration to the Immaculate Heart of Mary, at the National Shrine of Maipú, to invoke God, through the intercession of Mary, in the face of the COVID-19 emergency. As the note of the archdiocese informs, the celebration will begin at 6.30 pm and there will be the Image of the pilgrim Lady of Fatima, sent by the Shrine of Portugal, which is making a pilgrimage through the dioceses of Chile.
The archdiocese's statement underlines: "in communion with Pope Francis - who on March 27 during his extraordinary blessing Urbi et Orbi reminded the world that "prayer is our winning weapon"-, the Church of Santiago invites you to join this celebration, only via streaming".
In September last year this image of Our Lady of Fatima arrived from Santiago to Portugal, and began the pilgrimage to the dioceses of Rancagua, Temuco, Villarrica, Los Angeles, Linares, Talca, San Bernardo, San Felipe, Melipilla and Valparaíso; in the prelature of Illapel and in the archdiocese of Concepción.
Andrés Giménez, coordinator of the Apostolate of Fatima in Chile, underlined in the statement released by the archdiocese, that since the emergency of COVID-19 began, the Marian image has visited various monasteries and at the end of May it will be in Antofagasta for two weeks and then will return to the capital. In the visits attended by the faithful, before the health emergency broke out, Giménez said that "people were able to see her, get closer to her". The Pilgrim Lady of Fatima will be in the country until the beginning of September this year, pending the resumption of on-site visits.
With the motto "Come and follow me", the Archdiocese of Santiago is experiencing the month of May as the "Month of vocations", with a series of activities and initiatives all carried out online, following the emergency due to COVID-19. (SL) (Agenzia Fides, 12/5/2020)

AMERICA/HAITI - Despite the pandemic, Haitians celebrate Our Lady of Perpetual Help, invoking her to get out of the crisis

AFRICA/IVORY COAST - The Marian shrine of Our Lady of Africa, among the shrines that will join the Pope in the Marian prayer