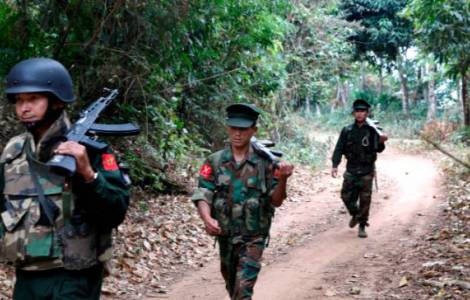 Yangoon (Agenzia Fides) - A special prayer to ask for healing from coronavirus and the end of the war in the nation: in this spirit, the Catholic Bishops' Conference of Myanmar has announced its participation in the "Day of prayer, fasting and charitable works", universally called by the High Committee for Human Fraternity, to implore God to help humanity overcome the coronavirus pandemic. The appeal was re-launched by Pope Francis and the Grand Imam of Al Azhar, Sheikh Ahmed al Tayyeb. But a pandemic in many countries, such as Myanmar, is combined with the word war.
A few days ago, Nai Tun, a 37-year-old civilian, was seriously injured in the leg by the explosion of a mine in the village of Han Gan, in the Ye Township of Mon state, in southeast Myanmar: it is only the lastest news of a "war on the sly" that makes Myanmar a country with ongoing low-intensity conflict. Although the war is now under way mainly in the Rakhine and Chin States, its devastating effects are felt everywhere. On the same days, on May 3, three separatist organizations fighting against the central government of Yangoon, such as the Arakan Army - formation on the list of groups considered terrorists - reiterated the appeal to ceasefire, already disclosed at the beginning of April, with a "one-sided truce", says a statement, which does not rule out a response in the event of an attack.
The confusing situation, especially in the Mon and Rakhine States - where the army has rejected the truce - makes it difficult to attribute responsibility for civilian deaths to rebels or government soldiers. On April 20, a driver of the World Health Organization was killed while carrying medical supplies. In recent days, a convoy of aid from the World Food Program, with rice and other basic foodstuffs, was attacked by the Arab Army between the cities of Samee and Paletwa (Chin), and a driver was injured.
The war and mutual accusations do not facilitate the access of humanitarian workers in crisis areas, where the expansion of Covid-19 is compounded by an endemic food shortage, now worsened by the virus. The sowing of monsoon rice - which accounts for 80% of Burmese production - typically begins in late April with harvests in September and October, but since government and microfinance institution loans are suspended, many farmers are unable to get the necessary seeds.
After the attacks on UN convoys, United Nations agencies and several NGOs operating in Myanmar have asked for an immediate ceasefire in the western area of the country, but the government of Rakhine state responded by forbidding humanitarian groups to create camps for internally displaced persons (IDP) without the approval of the executive: in the north of the State at least 160,000 people have been displaced due to the fighting between the army and the Arakan Army.
On April 27, the Federation of Asian Bishops' Conferences had accepted the request of the UN and Pope Francis for a global truce in the face of the unprecedented threat of the pandemic. A few days later an appeal in the same direction had been signed by several foreign embassies in the capital Yangoon. (MG-PA) (Agenzia Fides, 8/5/2020)

AFRICA/NIGERIA - Christian Association of Nigeria: "The State must protect the Bishop of Sokoto"