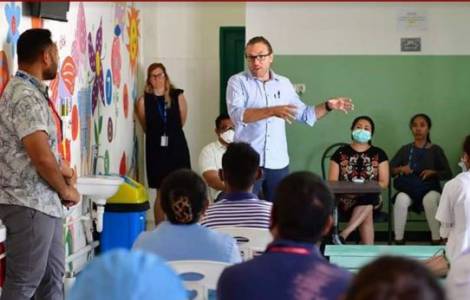 Dili (Agenzia Fides) – In order to provide spiritual, psychological and material assistance to the poor directly affected by the Covid-19 pandemic, the Archdiocese of Dili has set up a "pastoral task force" of priests, religious and lay people with skills in psychology and medicine who work closely with local Caritas in order to distribute aid. The initiative was announced in late April by the Archbishop of Dili, Mgr. Virgílio do Carmo da Silva, after a meeting with Prime Minister José Maria Vasconcelos. "A specific task force initiative was taken as a response to the calls of the Integrated Crisis Management Center Covid-19 for cooperation and support for those who are quarantined or in isolation", said Archbishop Da Silva after the meeting, noting that the lockdown, also represents a moment of psychological, as well as social and economic trial. The Premier on his behalf congratulated the Prelate and invited the Church to continue providing spiritual, psychological and material assistance to those affected by the pandemic.
Father Angelo Salsinha, who heads the team organized by the archdiocese, will enjoy the support of several religious in the hospitals of Timor. One of them, Canossian nun Guilhermina Marcal, has already sewn a thousand face masks to give to the needy.
As reported by the Archbishop of Dili, the Bishops of Timor will redirect funds donated by the Korean Church for a new nunciature to help in the fight against the pandemic.
The Timorese Church's full support for new measures decided by the government after the increase in cases registered in the country was also reiterated, urging citizens to be disciplined to "break the chain of contagion". The government has, in fact, announced the extension of the restrictions on social life, which had been imposed on March 21 to contain the infection, throughout the month of May.
The Archdiocese of Dili in Timor-Leste suspended public masses and other pastoral activities after the ministry of health announced the first Covid-19 case and state of emergency on March 28th. Since then liturgical celebrations have been broadcast on TV, radio and through social media. During the Easter celebration, Archbishop do Carmo da Silva had said that "celebrating Easter in the midst of the Covid-19 pandemic invites all of us to put aside our personal, group or party interests and create unity to fight the virus".
The smallest and poorest East Asian Country, Timor-Leste, has proven to be an example of virtue in dealing with the coronavirus pandemic. The government closed the three land borders with Indonesia on March 19, even before the first case occurred on the 21st of the same month. With a population of about 1.3 million, 95% are Catholics, Timor-Leste registers only 24 cases and no victims.
That of Timor-Leste is a history marked by the decolonization from Portugal in 1975, which was followed in 1976 by the Indonesian military invasion that annexed half of the Portuguese island of Timor: a history of violence and death that lasted until 1999 when a referendum - mediated by the UN and accepted by Jakarta - marked the new era of independence for the island, which officially began in 2002 after two years of chaos and accidents. The emergency of Covid-19 is now a challenge, but the country has been able to react, also thanks to the contribution of the local Church. (EG-PA) (Agenzia Fides, 6/5/2020)

ASIA/BANGLADESH - Men of service and proclamation of the Gospel: 13 new deacons for the Church, three of them tribal