AFRICA/NIGERIA - "He continued preaching the Gospel and asking me to change the evil ways, that is why I killed him", says the murderer of the young seminarian 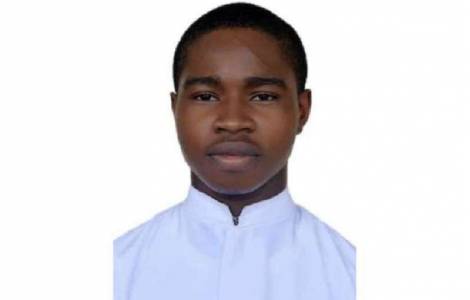 2020-05-04
"He continued preaching the Gospel and asking me to change the evil ways, that is why I killed him", says the murderer of the young seminarian

2020-04-08
"Coronavirus makes us more humble, invites us to return to God and to show solidarity towards the poor"

2020-03-27
Streets deserted and Masses broadcast on TV: Nigerian Christians in the face of the coronavirus

2020-03-17
Religious dies in the flames after rescuing students

Abuja (Agenzia Fides) - "He continued preaching the Gospel and asking me to change the evil ways, that is why I killed him". This is what Mustapha Mohammed reported during an interview to a Nigerian newspaper, arrested on charges of being the murderer of Michael Nnadi, the youngest (18 years old) of the four seminarians kidnapped from Good Shepherd Seminary in Kaduna, , in the north-west of Nigeria, on the night of January 8 (see Fides, 13/1/2020).
Mustapha Mohammed, who is currently in jail, gave a telephone interview to the Nigerian newspaper Daily Sun. He took responsibility for the murder, because Nnandi, 18 years old, "continued preaching the gospel of Jesus Christ" to his captors.
According to the newspaper, Mustapha praised Nnadi’s "outstanding bravery", and that the seminarian "told him to his face to change his evil ways or perish".
Nandi was kidnapped by gunmen from Good Shepherd Seminary in Kaduna on January 8, along with three other students. The seminary, home to some 270 seminarians, is located just off the Abuja-Kaduna-Zaria Express Way. Mustapha, 26, identified himself as the leader of a 45-member gang that preyed along the highway. He gave the interview from a jail in Abuja, Nigeria, where he is in police custody.Mustapha, 26, has been identified as the leader of a 45-member gang dedicated to plundering motorists along the highway.
Ten days after the abduction, one of the four seminarians was found on the side of a road, alive but seriously injured. On Jan. 31, an official at Good Shepherd Seminary announced that another two seminarians had been released, but that Nnadi remained missing and was presumed still in captivity. On Feb. 1, His Exc. Mgr. Matthew Hassan Kukah , Bishop of Sokoto, Nigeria, announced that Nandi had been killed. (L.M.) (Agenzia Fides, 4/5/2020)