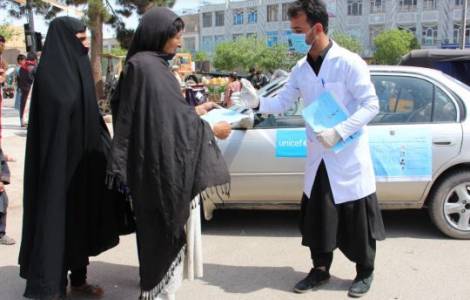 Kabul (Agenzia Fide) - "We have launched the largest social communication campaign in the Country. Our teams of young volunteers are active in visiting 18 provinces and creating awareness of the risks of the virus and ways to contain its spread, as well as distributing sanitation material": this is what Hamidullah Zazai tells Agenzia Fides with regards to the initiatives of the youth branch of "Mediothek Afghanistan", organization of which he is director, established in the local civil society after the overthrow of the Taliban regime, which occurred in 2001.
In order to cope with the spread of coronavirus, the government of Kabul in recent weeks has introduced containment measures, imposed social distancing, activated information campaigns, but the country's health system is in deficit: there is a lack of resources, equipped facilities, skills, devices and funds. In addition to international agencies, civil society and organizations such as Mediothek are therefore active and important in containing the virus.
Afghanistan officially registers 1300 infected and about 50 deaths, but tests are extremely limited and the cases are much higher. The coronavirus-related health emergency is added to political instability, institutional fragility, dependence on international donors, vulnerability of the population, especially in conflict areas, rural areas or in the informal camps of internally displaced persons. Correct information is often lacking in these areas.
"This is why we have aimed for a widespread campaign outside the main cities", adds Hamidullah Zazai. The door-to-door campaign "reaches thousands of Afghan families" in 60 districts, and is based on principles of solidarity and humanity, which have never disappeared despite 40 years of war and are particularly alive with the start of the holy month of Ramadan. For Ahmad Sultan Karimi, founder of Mediothek Afghanistan, "it is the responsibility of everyone to take care of their fellow citizens", especially those in difficulty, with less resources, who live in rural areas, where the institutions are in hiding. And where the conflict has produced more negative consequences.
In Afghanistan, more than 50% of the population lives below the poverty line, at least 9 million inhabitants (out of about 35) need humanitarian assistance. According to the World Bank, there are only 3 doctors per 10,000 inhabitants. And the Global Health Security Index places Afghanistan among the least prepared countries in the world.
The economic, social and health impact of the virus is likely to be dramatic. According to the United Nations World Food Program, people in "acute food need" will rise from 135 million to 265 this year worldwide. Afghanistan, with more than 11 million inhabitants considered to be "seriously insecure" from a food standpoint , is among the five countries - along with Yemen, the Democratic Republic of the Congo, Venezuela and South Sudan - that will suffer most from food shortages.
In spite of the humanitarian crisis, the conflict does not stop. The political agreement signed in Doha at the end of February between the Taliban and the United States reduced the military confrontation between these two actors, not that between the government of Kabul and the "Koranic students". In recent days, both the Taliban and President Ashraf Ghani released detainees. It was a humanitarian gesture, to respond to the emergency of the virus, and at the same time of a political nature, to encourage the start of real intra-Afghan negotiations. "We hope to begin with a prolonged truce", as invoked by the UN secretary general, Antonio Guterres, and Pope Francis. (GB-PA) (Agenzia Fides, 24/4/2020)