AMERICA/HONDURAS - Human rights do not disappear nor lost when crossing borders: hundreds of migrants stranded in Honduras 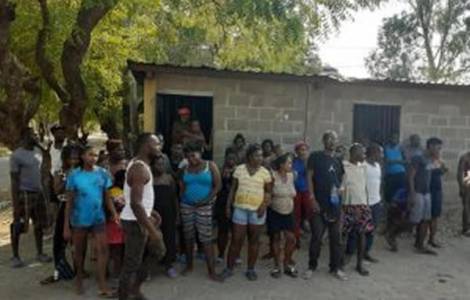 Choluteca (Agenzia Fides) - "About 300 people originally from Haiti, Cuba and Africa (mostly Haitians) have already overcrowded the rooms they had rented in Choluteca, Honduras for more than 24 days", this is how the letter sent to Fides by the Pastoral Ministry of Human Mobility of Guatemala begins, in the face of the situation experienced by hundreds of migrants in Honduras, Guatemala, Nicaragua and Mexico.
The text continues: "They claim they have no more money. They ask for 5 to 7 dollars a day for each person. There are many who are under 18 and pregnant women. In one of the houses there is a woman who is about to give birth They claim that she was not accepted in the hospital because she has no residence. No organization came forward except one who went to ask for the total number of people, names and passport details. Initially women lawyers who form a network of defenders of Human rights in Choluteca supported those who had been thrown out of a house and are now on the street.
One of them says that a representative of the IOM (International Organization for Migration) offered them support to return to Haiti by air. Because of government regulations and neighbors' threats, they cannot go out on the street to buy anything. They were told to wait for the borders to open, but were also threatened they would be deported to Nicaragua.
We know and are confident that hundreds of migrants from the Caribbean and Africa cross Central America, as some countries grant them humanitarian transit visas or an administrative sanction to leave the country. Nicaragua and Honduras ask on average $ 150 for these transit office practices per person. We have copies of these documents.
Now because of the health crisis, hundreds of them have been stranded in the Central American region. Some were deported from Honduras to Nicaragua. The thousands of Haitians and Africans who managed to enter Mexico can be seen in Tijuana and Tapachula. Some of them are waiting for COMAR's asylum sentence and others are just waiting or "despairing" for the moment to continue.
We can also see them inside the immigration station in Tapachula, where, according to Haitians who have been detained for up to 15 days, they do not receive dignified treatment. Food is very scarce and the place is overcrowded. With the epidemic, things get worse for them. They do not have a job, neighbors do not want to rent houses, are frowned upon, feared and discriminated against not only because of their race, but as suspected and potential carriers of the coronavirus.
Several questions arise: what to do? Human rights do not disappear nor lost when crossing borders. We urgently ask for humanitarian aid: food, medical care, access to health and access to justice. Honduran government must respond immediately and deal with these migrants. In the event of an emergency, the necessary aid must be coordinated and requested from international cooperation organizations.
It is necessary to seek the support of IOM, UNHCR, UNICEF and civil organizations to respond urgently because this has become a humanitarian crisis.
On the other hand, it is now time to dismantle organized networks of people for illicit trafficking and human trafficking along the migration route. This is such a shameful and inhumane business.
We insist on a greater political, ethical and human commitment of those who govern, so that their citizens do not have to flee from poverty, misery, lack of opportunity, violence due to corruption and impunity.
Solidarity among States has to be genuine, to avoid these forced migrations, put an end to illicit human trafficking, drugs and weapons. We support the dignity and justice of migrants and refugees. Church, media, governments, institutions that defend human rights (at a national, regional, inter-American, international level) and people of goodwill can respond to these tragedies. It is about humans. It is about us".
The document is signed by Father Juan Luis Carbajal, CS, Executive Secretary of the Pastoral Care of Human Mobility in Guatemala. (CE) (Agenzia Fides, 17/4/2020)

ASIA/INDIA - A Jesuit: "The life of refugees matters: No to exclusivism and false nationalism"

AFRICA/MOZAMBIQUE - The alarm of the missionaries: New jihadist attack in the North destroys church, hospital, houses