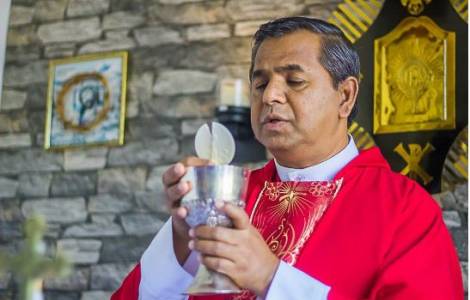 Colombo (Agenzia Fides) - "The lockdown in which we live today is a test but also an opportunity to rediscover and strengthen our faith in God. We miss the faithful very much, while we celebrated Easter Mass in the absence of the people. Think of last year, when Easter was marred by terrorist attacks, today we live in isolation, with a sense of fear and fragility. But this will be a time of purification. Christ will free us from the pandemic. Easter is the beginning of a new life. The blood of Christ, shed for the salvation of humanity, will heal the world": is the testimony released to Agenzia Fides by Fr. Basil Rohan Fernando, National Director of the Pontifical Mission Societies (PMS) in Sri Lanka. The National Director tells Fides that, on Easter 2020, lived while the government proclaimed an indefinite "curfew" due to Covid-19, the Catholic faithful in Sri Lanka remembered the innocent killed a year ago: "We have in fact completed the construction of the new Chapel of the martyrs in Negombo, one of the places of the attacks. The work was carried out thanks to the generous donations collected by the PMS. The inauguration was scheduled during a commemoration set for April 21, on the first anniversary of the violence, but we do not know whether the celebration will take place", adds the Director.
Another important theme that characterized Easter 2020 in Sri Lanka was forgiveness. In a solemn Easter Mass, in the absence of the faithful, but broadcast live on state television, Cardinal Malcolm Ranjith, Archbishop of Colombo, declared that the community of believers in Christ "responded with love to those who tried to destroy us". The Cardinal referred to the terrorist attacks that struck three churches and three luxury hotels on April 21, 2019, causing 279 victims and injuring over 600 people. After a journey of discernment guided by the Word of God, and following the example of Christ crucified, that does not condemn his executioners, "we too do not hate them and do not respond to them with violence". Forgiveness is a gift of the grace of God that allows us to "love, forgive and have compassion for the persecutors", confirmed the Cardinal, speaking on behalf of the entire community of the baptized who, in the nation touch 7.4% (6, 1% Catholics and 1.3% Protestants) out of a population of over 21 million inhabitants.
The public gesture of forgiveness was highly appreciated. Bank employee Catholic Juliette Paththamperuma tells Fides: "The Cardinal's announcement shows that society can progress and look forward when forgiveness and reconciliation take root in every person's heart by eliminating all forms of hatred, animosity and violence. The act of forgiveness shown by Jesus, our source of inspiration, must influence all of us during these difficult times when the world faces the coronavirus pandemic".
However, civil and criminal justice will have to run its course. In recent weeks, the Sri Lankan Catholic Bishops' Conference also asked the government for an independent commission of inquiry to ascertain the perpetrators and those responsible of the attacks. (SD-PA) (Agenzia Fides, 14/4/2020)

AFRICA/IVORY COAST - One month of the presidential elections, a conference on "prevention and peaceful management of conflicts"

AFRICA/DR CONGO - Xenophobia in South Africa; the Congolese Catholic laity: "No to temptation of revenge"

ASIA/PHILIPPINES - The Eucharist at the time of the coronavirus: a drive-in mass

AFRICA/EGYPT - Pope Francis calls Coptic Patriarch Tawadros: let us together ask God to have mercy on the world

ASIA/HOLY LAND - Orthodox Easter, Covid-19 does not extinguish the "Sacred Fire" rite in the Holy Sepulcher