VATICAN - Covid-19, Caritas Internationalis to governments: "Do not forget the poor, migrants, peoples victims of wars" 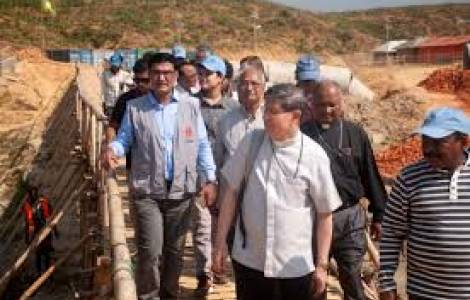 2020-06-04
POPF Secretary General: "Every emergency in mission lands is always a concern for the Pontifical Mission Societies"

2020-06-02
Other aid from the PSM Fund for the Covid emergency in Sao Tomé and Principe, Sierra Leone, Chad and Guinea

Vatican City (Agenzia Fides) - "Do not forget the South of the world, migrants and refugees, continue to help countries facing war and poverty" is the invitation that Caritas Internationalis (CI) has addressed to governments in response to the Covid-19 pandemic. "Each of the 165 national Caritas has put in place projects and measures to support the populations affected by the pandemic and to prevent the virus from spreading in countries where this it is still in its infancy", explained Aloysius John, during an online press conference with the general secretary of Caritas Internationalis, Aloysius John on Friday 3 April 2020 with some journalists in which Agenzia Fides also took part.
Among the key points reported by the General Secretary, first of all the awareness of the global population and the accompaniment of the most vulnerable groups. "Everyone - he remarked - has the right to receive the right orientation to avoid getting infected. We must not lose sight of those poor countries that could be more helpless and in need of global solidarity. In areas such as Syria, South Sudan, Africa in general, the epidemic could lead to a humanitarian disaster. The health system situation in these areas is fragile, our emergency department is mobilized, and we work together with the Holy See to identify what the needs are and how we can help. The different Caritas of the continent are being organized, in connection with the local Episcopal Conferences".
"In particular, Caritas is very active throughout Africa to increase awareness so that information reaches even the most remote communities, which can thus equip themselves to prevent the spread of the infection", said Suzanna Tkalec, CI's humanitarian director, and added that in Rwanda for example, Caritas started broadcasting awareness messages through diocesan radio even before there was only one case of COVID-19 and that Caritas Kenya is recruiting doctors and nurses to be hired to address the situation if it gets out of control.
"The needs will be immense, - insisted Aloysius John - we will have to strengthen health systems, we will have to be truly pro-active, and solidarity must be up to par. We are all united against a common enemy. I hope that the unprecedented suffering that we are suffering in Europe, and that has taken us by surprise, will help us to be more united. It is very important - he added - what Pope Francis said, that today we are all united, that there is not 'we' and 'them' but we are one human family. Human suffering should unite us, and as a Church we have a role to play. I believe that solidarity will unite us".
The General Secretary then gave an overview of some of the most contingent realities, citing among others Italy where, despite the dramatic situation, Caritas’ work has continued through soup kitchens, dormitories for the homeless and assistance to the elderly, including through a dedicated telephone line. In Spain and the United States, the other two countries currently most affected, the respective Caritas, together with other local charitable organizations, are active 24 hours a day. In Venezuela, where the spread of the virus is aggravating an already disastrous economic situation, volunteers also provide food aid and hygiene kits at home. In India, where the pandemic is just starting but hundreds are already infected, Caritas has supplied more than 72 thousand bottles of disinfectant, over 4 million masks and 64 thousand kits for personal hygiene. The Secretary General also stressed the serious risk for such a large population of starvation and thirst. In the Philippines, the desire to continue to help has led to the creation of “kindness stations” where food aid is distributed to the poorest.. In Ecuador, where the spread of coronavirus is now rampant, local Caritas is already helping nearly two thousand people, including about a thousand children and adolescents.
The Secretary General urged not to forget the most vulnerable people present in all States. Especially migrants, refugees and asylum seekers, such as the Rohingya who are at greater risk of contagion due to the conditions in which they live and called on local authorities to guarantee them access to basic services, regardless of their legal status.
Aloysius John recalled that, in line with Pope Francis and with Cardinal Luis Antonio Tagle, prefect of the Congregation for the Evangelization of Peoples who is also president of Caritas internationalis, the body appeals for a ceasefire across the globe, to the cancellation of the public debts of developing countries and the elimination of sanctions in Syria, Libya, Yemen and Iran. "The future will not be like the past, and this is also why we must prepare to help people return to normal life by giving strong reference points", said Aloysius John with regards to the post-crisis.
The Secretary General of CI concluded the conference by saying that today, Saturday 4 April 2020, he will be received by Pope Francis "to explain to him what we are doing as a mission of the Church in support of the various local Churches. The Pope has already given help to Italian Caritas, but also funds for China. In addition to informing him, we will ask him how to continue this mission, how to witness the Pope's solidarity in particular for the south of the world and for Africa, where there would be enormous needs if the coronavirus were to spread". (AP) (Agenzia Fides, 4/4/2020)

AMERICA/PERU - Missionary year of the family: in the midst of the pandemic, "rediscovering the beauty of family life"

AMERICA/BRAZIL - "Tempo de Cuidar": aid campaign for the most vulnerable people during the Covid-19 crisis