EUROPE/ITALY - Covid-19: even more dramatic situation for those living in war zones 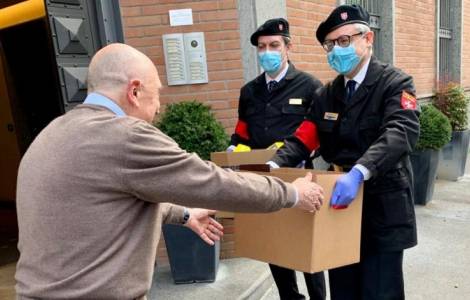 2020-06-02
In time of Coronavirus, the commitment of the Blessed Scalabrini is always present, at the forefront of calamities

2020-05-11
Today, like yesterday: the Camillians at the forefront of the Covid-19 emergency

2020-04-28
The Sisters of Don Orione continue to assist the disabled, minors and the elderly during the pandemic, "now we need help"

Rome (Agenzia Fides) - "Concerns are growing for communities living in war zones around the world, where access to basic health care is scarce and insufficient. The displaced people in these areas already suffer from the lack of drinking water, food and health services", underlines the Grand Hospitallier of the Order of Malta, Dominique de La Rochefoucauld-Montbel, in a note sent to Agenzia Fides, who asks for an answer to the spread of the Covid-19 pandemic in regions where medical systems are unable to cope with normal needs.
Present in many areas of conflict, from the Middle East to sub-Saharan Africa, the Order of Malta points out that 25 African countries have already reported Covid-19 cases. The Order, which has many ongoing medical activities in about 30 African countries, is providing protective equipment to its medical teams so that they can continue to work at the service of local communities.
Father Gérard, founder and president of the Brotherhood of Blessed Gerardo, in Mandeni in South Africa, one of the poorest areas in the world, warns of a possible tsunami. Out of 59 million inhabitants and the number of sick people is, at the moment, still low, but "we are facing a huge danger, our healthcare facilities are not capable of facing a similar situation, and the virus is spreading rapidly in the Country". According to the forecasts of the Minister of Health, 60-70% of the South African population will be infected with the virus.
Concerns are also multiplying about a possible Coronavirus outbreak in Syria, which has now entered the tenth year of the war. In the northwestern province of Idlib alone, nearly one million people have fled their homes in the past year due to continuing violence. Many live in overcrowded settlements, where hygiene and sanitation conditions are very poor. "The situation in Northwest Syria was already very fragile before the Coronavirus epidemic, now with almost one million new internally displaced persons on the move, a rapid spread of the virus would have consequences beyond imagination. The health system is not able to deal with the consequences of war", says Janine Janine Lietmeyer, Middle East Team Leader of Malteser International, the Order of Malta's international relief agency.
The concerns also apply to other countries that are experiencing humanitarian crises due to civil wars, poverty and political unrest. Jelena Kaifenheim, regional manager of Malteser International for the Americas, says: "Severe quarantine measures in Colombia have created additional needs. The situation it is now dramatic, especially for Venezuelan refugees and local populations, who survive with humble jobs and who are now struggling to feed themselves". Most of them do not have access to water, soap, health services and do not have the basic conditions to comply with the quarantine rules. (SL) (Agenzia Fides, 31/3/2020)