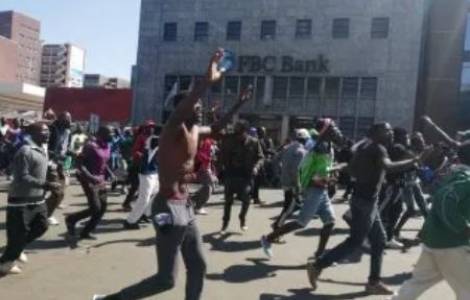 2020-04-29
Zimbabwe, Churches in the frontline for a national agreement

2019-10-23
A lay missionary, an apostle of lepers, towards beatification

Harare (Agenzia Fides) - "After the elections, we all thought that we would face violations of rights and take the road to a fully democratic future. In fact it seems that in less than two years everything is being thrown to the wind. Violations continue, there are deaths, arrests and suffering. The new Constitution, approved in 2013, is still waiting to be implemented, there are delays and the intention to amend it in order to increase government power". This is the analysis reported, in an interview with Agenzia Fides, by rev. Kenneth Mtata, Christian leader of the Lutheran Church and Secretary General of the "Zimbabwe Council of Churches" (ZCC), a platform of Protestant Churches that is offering a contribution of ethical and civil commitment in a critical phase of national history.
Zimbabwe's path to democracy, almost two years after the historic elections that closed the endless era of dictator Robert Mugabe - in power for 38 years - is very rough. The terrible data that comes from the "Breadbasket of Africa", emptied by years of dictatorship and disfigured in terms of rights, are confirmed, in all their brutality. The nearly 17 million inhabitants who had taken to the streets in mass to celebrate the end of the tyrant and the victory of Emmanu Mnangagwa, head of Zanu-Pf (Mugabe's same party) in the elections of July 2018, hoped in the beginning of a new democratic and prosperous era, but they face a dramatic situation: 95% unemployment, an inflation rate above 500%, over 70% of the population below the poverty line, serious political instability and trampled rights.
The socio-economic data speak of a situation on the verge of collapse. "Everyone expected an economic recovery given the resources of our Country, but the economic parameters have worsened in the last two years and inflation is close to 600%. Furthermore, the two most represented parties do not cooperate and the situation becomes more worrying every day, with high rates of corruption", notes Pastor Kenneth Mtata.
In order to relaunch national dialogue and try to get out of the impasse, the Churches have also taken the field, protagonists of high social and political initiatives: "In December we launched the Comprehensive National Settlement Framework, a platform that brings civil society, workers and representative bodies together. The aim is to increase the impact of joint action and force political parties to dialogue. The presidency is the prerogative of the Catholic Bishops’ Conference while the Secretariat is entrusted to the Council of Churches. We propose a national forum with all political actors. In these days we are moving on to the operational phase and we trust that it will be an effective tool to get out of the tunnel". (LA) (Agenzia Fides, 16/3/2020)