AMERICA/COLOMBIA - "With Mary, beyond borders": the preparation of the National Missionary Congress proceeds 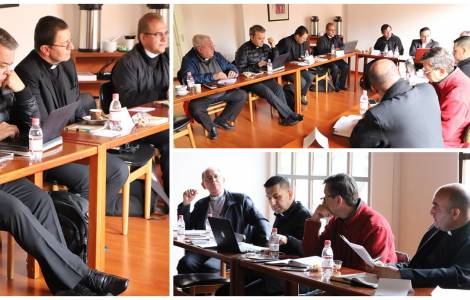 2020-05-08
Covid-19: health mission in the Vicariate of Inirida, the Bishops of Nariño ask the President for "urgent care"

2020-05-06
Family month in times of pandemic: "With Mary, we experience the domestic Church"

Bogota (Agenzia Fides) - The Marian dimension of the Mission, expressed by the motto "With Mary, beyond the borders", is the main theme of the XIII National Missionary Congress which will be celebrated from 25 to 28 June in the Colombian city of Pereira. "The Marian dimension was chosen as a thematic axis, because the Gospel of St. Luke tells us that Mary, when she received the Angel's announcement, got up and hurried to the Judean mountains - explains Father Jorge Enrique Bustamante Mora, director of the National Center for Evangelization and Faith of the Episcopal Conference, in the note sent to Fides – Mary’s attitude, to set off immediately and carry Jesus, in her womb, to reach Elizabeth who was pregnant, is what motivates us, so that even the baptized today set out to proclaim Jesus".
With the basic objective of reaffirming the commitment of a missionary Church, preparations for the national missionary event are being intensified in this period, which foresees about 1200 participants, including lay and religious, from different regions of the Country. The presence of a special guest is expected, Archbishop Giampietro dal Toso, current President of the Pontifical Mission Societies.
An important part of the Congress will be dedicated to considering how the announcement of the Lord proceeds among young people, migrants, the Amazonian reality, Afro-descendants and indigenous people: "we want to ask ourselves how to reach these socio-cultural realities of Colombia and the world with the announcement of the Lord", explains Father Bustamante Mora. Congress also wants to "reawaken the commitment that the baptized, formed and eager for the mission, go to regions within the nation to announce the Lord, or can even say: I want to go to Africa or I want to go to Asia, or I want to go to those realities where the Lord is not known".
Those who will not be present in person at the Congress, will still be able to follow it and interact through the social networks Twitter and Facebook Live, thanks to the efforts of the Communications Department of the Episcopal Conference. Every 4 years the National Missionary Congress is celebrated in Colombia, and work is already underway because the centenary of this missionary event will occur in 2024. The National Missionary Congress of Pereira is organized by the Episcopal Commission for Missionary Animation of the Episcopal Conference of Colombia (CEC), together with the Department of Missionary Animation, in collaboration with the Pontifical Mission Societies and the Diocese of Pereira, the representatives of the major Seminaries of Colombia, pastoral care with Afro and indigenous communities, as well as some lay missionaries. (SL) (Agenzia Fides, 6/3/2020)

VATICAN - "Here I am, send me": Pope Francis' Message for World Mission Sunday

EUROPE/FRANCE - A PMS website to get to know Pauline Jaricot, who invented "the first missionary social network"

AFRICA/ANGOLA - PMS Solidarity Fund: "In this period people need the Word, but also bread to survive"