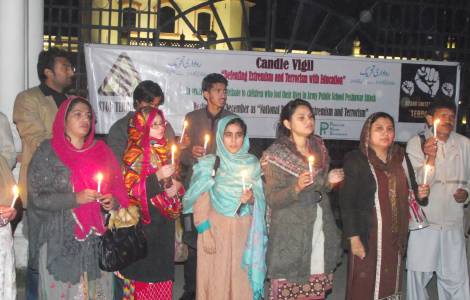 Lahore (Agenzia Fides) - "The barbaric murder of Saleem Masih, a young Christian from the Kasur district, who was beaten, kicked, chained and tortured with electric cables and a red-hot iron bar and died due to his injuries (see Fides 2/3/2020), goes beyond any sentence. The accusations against him were of being 'a dirty Christian' and 'having polluted' the water of a well. This horrible act of violence is a grim reminder that intolerance in the name of religion in Pakistan has grown beyond the rule of law". This is what Michelle Chaudhry, Catholic woman and President of the "Cecil & Iris Chaudhry Foundation" (CICF), an independent organization that works for justice and is concerned with promoting the economic, social and cultural conditions of Christians in Pakistan, says to Agenzia Fides.
Expressing outrage over the incident, Michelle Chaudhry declares: "In Pakistan, when it comes to religious minorities, anyone is free to act as a prosecutor, judge and executioner of a sentence. We cannot allow this to continue: impunity for violence against religious minorities in Pakistan must end".
"We ask governments, both at federal and provincial level, to guarantee security and protection to all non-Muslim Pakistanis, sanctioned by the country's Constitution. Incidents like these generate a wave of insecurity that leaves our communities extremely vulnerable. It is the state's responsibility to protect its citizens regardless of faith, social status, gender", notes Chaudhry. The woman says that "in order to prevent such acts of violence in the future, it is essential to conduct an impartial investigation and that the perpetrators are brought to justice".
Meanwhile, the heath condition of Azeem Masih, a 32-year-old from the village of Sahiwal, one of the Christians hit in the head by a group of Muslim militants who wanted to prevent the construction of a chapel in the village, is still serious (see Fides, 25/2/2020). The young man, after brain surgery, in a hospital in Lahore, is unable to speak. The young man needs physiotherapy and speech therapy treatments which, according to the doctors, may last at least a year. Azeem is married to Humaira (30 years old) and the two have an 8 month old son. "Azeem is an exemplary and committed husband and father, a man of God who only wanted to help our community build a small place for worship", says his wife. The family is exhausted and is living a situation of fear and resignation, after the violence suffered, completely unpunished. (PA) (Agenzia Fides, 4/3/2020)