ASIA/MALAYSIA - Christians pray for peace and healing in the country 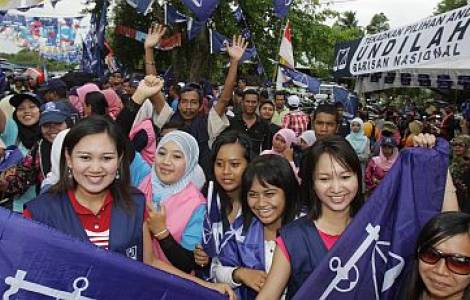 2020-02-19
Peace, love and faith: cornerstones of a harmonious society

2019-11-27
Malaysia and the Holy See: together for peaceful coexistence

Kuching (Agenzia Fides) - Christians in Malaysia "offer fasts, penances and invoke intercessions for the country, for the government, for the common good": this is what is said by Catholic Archbishop Simon Poh, at the head of the diocese of Sarawak and President of the "Association of Sarawak Churches", which brings together Christian communities of different denominations. The faithful are "praying for peace and the healing of the country", the Archbishop remarks in a note sent to Fides, facing two issues affecting the country in this period, the first being political in nature (the new government), the second is of a health nature (coronavirus).
Malaysia does indeed have a new Prime Minister, Muhyiddin Yassin, 72, who took office on March 2 after a turbulent week that saw the resignation of former Prime Minister Mahathir Mohamad and the implosion of the ruling coalition. Muhyiddin leads a coalition that includes his party (Pribumi Bersatu Malaysia), the United Malays National Organization (UMNO), the PAS (Malaysia Islamic Party) and has the support of other local political parties from the Sarawak region. UMNO (United Malays National Organization), the party that dominated the Malaysian political scene for over half a century, before the 2018 electoral defeat, returns to the government. Muhyiddin will face Parliament's vote of confidence next May: the postponement of the vote was motivated by the crisis generated by the coronavirus.
The Christians of Malaysia, says Archbishop Poh, "reject all forms of religious and political fundamentalism on an ethnic basis that cause disharmony, division and polarization in our nation". The new Prime Minister, the Churches hope, "must reject religious extremism and commit to social unity and religious harmony in Malaysia. The Prime Minister is a leader of all Malaysians, not of one race, one community or one particular religion", he recalled.
The second reason why Christians in Malaysia are called to incessant prayer, the Churches note, is the spread of the coronavirus: "While we are experiencing the crisis for the spread of COVID-19, let us remain vigilant, implement safe hygiene measures, maintain health precautions in all our houses of worship. The current epidemic is negatively affecting the world economy, the life and health of so many people in Malaysia and around the world: this is why we are called to implore God for healing and health".
The Malaysian Churches "are committed to promoting peace, harmony, unity, integrity, social development and well-being for all Malaysians of all ethnicities, creeds and cultures", concludes the note.
Malaysia is a multi-ethnic, multicultural and multi-religious country. Its population is made up of almost 32 million people: over 60% are Muslims of Malay ethnicity. Catholics represent 4% of the population. (SD-PA) (Agenzia Fides, 4/3/2020)