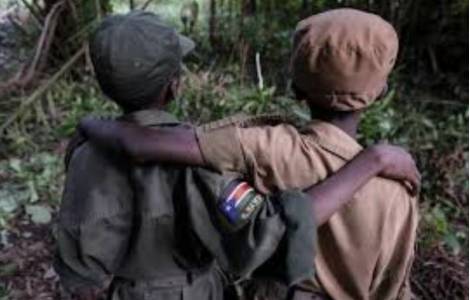 Juba (Agenzia Fides) - The news, released by UNICEF, of the release of a group of child soldiers, prisoners of war, released on February 26 in South Sudan has aroused sensation and hope. The children, the UN agency announced, had been taken prisoner in August 2019, during clashes in the north of the country, in the Raja area, between government troops and rebel fighters, loyal to General Paul Malong. "Today we celebrate the end of their imprisonment, their period in armed groups and the beginning of a new life", says UNICEF. Radio station "Radio Tamazuj", which deals with daily news, covering information on South Sudan and southern Sudan, has confirmed that there are 15 minors between 16 and 18 years of age, who arrived at the South Sudanese army base in Juba.
The release, supported jointly by UNICEF, the National Commission for Disarmament, Demobilization and Reintegration (DDR), of former members of the various armed groups operating in eastern DRC, took place just over two weeks after the action plan signed by the government of South Sudan to end and prevent any kind of violation against children.
"With the likely formation of a unified government in South Sudan and hopefully prolonged peace, UNICEF expects more children to be released and in need of support", said the UNICEF representative in South Sudan, Mohamed Ag Ayoya. The children released will be taken to an interim care center where they will receive psychosocial support.
The note sent to Agenzia Fides also states that "children are enrolled in a three-year reintegration program in which a dedicated social worker will guide them through the long and often complicated return to civilian life".
The national coordinator of the GDR Commission confirmed to Radio Tamazuj the origin of the released boys, 11 from northern Bahr el Ghazal, two from western Bahr el Ghazal and two from the state of Warrap. The Commission appealed to the government of South Sudan and to humanitarian agencies to support the released child soldiers.
UNICEF South Sudan requires US$4.2 million for 2020 to cover new releases and the immediate enrolment into reintegration programmes and for the continuation of the programme for children released previously. If adequate funding is provided, UNICEF will be able to support some 2,100 children released from armed forces and armed groups over the coming year.
According to the latest UN data, child soldiers continue to make war in at least 14 states, for a phenomenon that remains largely submerged, enrolled in regular or irregular forces. It is estimated that today, they are over 250,000 worldwide, often used in contexts of long-lasting conflicts in various African countries, including South Sudan, the Democratic Republic of the Congo, the Central African Republic, Mali, Nigeria, Libya, Somalia. A recent study carried out by the NGO "Save the Children" found that in Africa, in the areas affected by the conflicts, between 2014 and 2018 there was an increase in the recruitment of child soldiers, with over 24 thousand new children enrolled and used by armed groups. (AP) (Agenzia Fides, 28/2/2020)

AFRICA/ETHIOPIA - The National Director of the PMS: prayer, the only weapon in the dramatic situation in the Horn of Africa

AMERICA/EL SALVADOR - Archbishop Escobar Alas: no to constitutional reform according to an international project on abortion and euthanasia