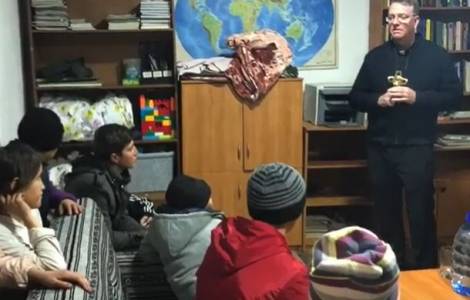 2020-03-10
Coronavirus crisis: “Thank God in advance and remember that evil won’t have the last word”

2020-01-23
Prayer and mission: Ignatian spiritual exercises on the banks of Lake Issyk-kul

2019-11-19
A new building for the Issyk Center, the holiday home for disabled and poor children

Bishkek (Agenzia Fides) - "God is close to Kyrgyzstan. The nation is a very interesting mix of cultures: elements from the Russian, Asian and Muslim backgrounds coexist in this land. We found a country of about 6 million people, 90% of whom profess Islam. The Christian population is very small and the Catholic population is even smaller: we are talking about 1,500 faithful. In this land, most Catholics are present thanks to the sacrifices of their grandparents who, during the Soviet period, were deported here from Germany, Poland and Russia. In this story of suffering, however, there is the Providence of God who planted and allows the seed of faith to sprout". This is the testimony sent to Fides by three Church representatives in the United States: Fr. Larry Machado, priest of the diocese of Stockton, Chris Smith, deacon of the diocese of Austin, and Fr. John Gancarz, of the diocese of Hartford. The three, after visiting Kyrgyzstan, made a video entitled "Kyrgyzstan: God is Near", a report in which they tell and show the main places of Catholic worship in the nation, such as the parish of the capital, Bishkek, the chapel dedicated to Mother Teresa of Calcutta, the memorial of the Polish fallen during the Second World War, in Jalal-Abad.
The three young recount the tireless service of the priests present in the country: "Every Sunday they drive for 30-40 minutes, to accompany the faithful, who live in the villages, home and who otherwise would not be able to attend mass.
We saw the apostolic administrator, Father Anthony Corcoran, speak Russian with people and study Kyrgyz, so that everyone can understand what he says. The faithful love this attention and recognize those who take care of them. They surround him, welcome him, smile at him". The presence of the Gospel in the Central Asian nation - say the three members of the American Church - is a small seed that is sprouting, thanks to the daily commitment of the priests and religious who totally offer their lives and are at the service of the population, always trusting in grace and in the help of God.
The three priests note, at the end of their pilgrimage: "God is close to the little ones, the last, to those in the suburbs". In Kyrgyzstan there are currently three parishes in the cities of Bishkek, Jalal-Abad and Talas, but many small communities are distributed in rural areas of the country. Local Catholics can count on the spiritual assistance of seven priests, one religious and five Franciscan nuns. In 1997, John Paul II founded the Mission sui iuris, as happened with the neighboring states of Central Asia. In 2006, Benedict XVI elevated the circumscription to the rank of apostolic administration. In addition to the Muslim majority, 7% of the population is of Christian faith, of whom 3% are Orthodox. Jews, Buddhists and other small minorities make up about 3% of the population. (LF) (Agenzia Fides, 27/2/2020)

AMERICA/PERU - Bishops: offer sympathy towards those who do not work, in order to face this hard moment as a family

AMERICA/HAITI - Covid-19: "What will happen will be catastrophic", testimony of a missionary