ASIA/INDIA - The Church in Delhi: no to violence, stop to troublemakers, help to injured protesters 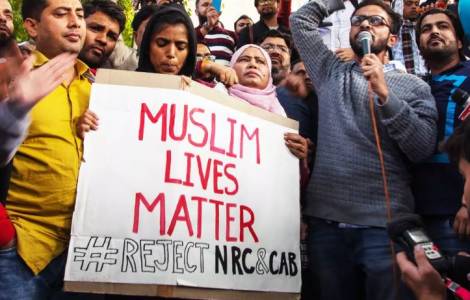 New Delhi (Agenzia Fides) - Churches, parishes, schools and ecclesial institutions in the archdiocese of Delhi are offering relief to people injured in clashes among communities of different faiths (Hindus and Muslims) that characterize the popular demonstrations organized in the Indian capital. The toll of violent inter-communal clashes between supporters and opponents of the new law (Citizenship Amendment Act, CCA), approved by the government, which grants Indian citizenship to immigrants from Bangladesh, Afghanistan and Pakistan and denies it to Muslim citizens from those countries, is of 20 dead and 189 injured. The unrest began in some areas of New Delhi on February 23. The government has deployed the police to monitor the situation.
Mgr. Anil J. Couto, Archbishop of Delhi, in a letter sent to the whole community, to parish priests, institutes, Catholic schools writes: "In this moment of trial, while sudden riots torment Delhi, we come forward with our prayers and every possible effort to bring relief to those affected in terms of shelter, food and clothing". The letter from Archbishop Couto, sent to Fides, asks the institutions of the Church to open themselves to the needs of the people, urging the parish priests to inform the faithful so that they "give their contribution to help all those in need in this Lenten season".
Sister Anastasia Gill, of the Congregation of the Presentation of the Lord and member of the Commission for minorities in Delhi, condemned the targeted attacks on Muslims. "Christians should not be mere spectators while Muslim citizens are attacked", says the religious to Fides, who is also a lawyer. "There are innocent victims and the injured are not allowed to go to the hospital for treatment. Shops in Muslim areas were burnt down by militants authorized to destroy property and create violence", she notes. "Our role is to defend justice", she says, urging members of the Christian community to "form peace committees in order not to allow troublemakers to infiltrate their areas". "Do not allow these people to enter your areas", she said. The religious urges Christian institutions to "monitor the situation, to be in solidarity with Muslims and other communities, taking measures to put an end to violence". Christians, she added, are called to bring medical aid to the injured and to give refuge to those affected by the violence.
Since last December, Indian citizens have been protesting over the controversial law. Opposition parties and critics argue that the law is unconstitutional in that it subordinates the granting of citizenship to a factor in one's private sphere, such as the faith professed by a person. The law, it is observed, contributes to marginalize and further penalize the substantial minority of Indian Muslims, which has 200 million citizens, out of a population of 1.2 billion inhabitants.
A .C. Michael, a lay Catholic leader, comments to Fides: "We must work to restore normality and peace to the city. Violence is not the answer. Peaceful means of protest should be allowed. It is the responsibility of the police to maintain law and order in the city, but without abusing their power or favoring some protesters over others. As Indian Christians we must contribute to calming things down, not to use violent means and to be bearers of peace in these situations". (SD-PA) (Agenzia Fides, 26/2/2020)