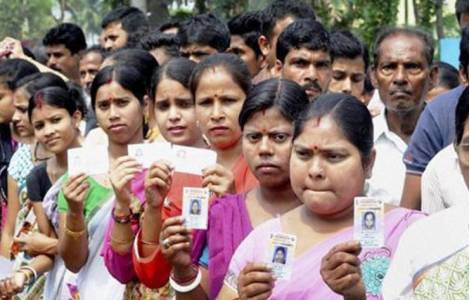 New Delhi (Agenzia Fides) - To oppose the ratification and application of the "National Population Register" (NPR), the register intended to conduct the Census and collect details on all the population present on Indian territory: this is the appeal launched by 73 leaders of Indian civil society, including members of all faiths, representing various social, professional and religious backgrounds, in a statement made public and has become a petition to the federal government. In the statement, sent to Agenzia Fides, the leaders refer to article 14 of the Indian Constitution, stating that the NPR is "discriminatory, divisive, exclusive and unconstitutional", and that it contributes to polarizing society based on factors such as religion, class, caste and gender.
Through the NPR, the Indian government, led by Prime Minister Narendra Modi, of the nationalist party Bharatiya Janata (BJP), intends to create a citizens' database, collecting biometric and demographic details. Each citizen must provide details on his/her life such as name, relationship with the head of the family, name of the parents, name of the spouse (if married), gender, date of birth, marital status, place of birth, nationality, address of residence, length of stay in India, profession and educational qualification. The Indian government has allocated $ 555 million to start registration which is expected to begin in April 2020.
Although the government claims that the compilation of the NPR will be done independently and is not linked to the other controversial National Register of Citizens (NRC), leaders note that the NPR is the "first phase of the data collection, to prepare the NRC, finally implementing the Citizenship Amendment Act (CCA)", the controversial citizenship law approved by the government and at the center of a wide-ranging popular protest. The law regulates the granting of citizenship to migrants from Bangladesh, Pakistan and Afghanistan, excluding from that benefit migrants of Muslim faith. The two registries (NPR and NRC), activists note, will be useful in identifying and isolating religious or ethnic minorities by defining all "irregular immigrants" and then deporting them. The collection of NRC data is intrinsically linked to NPR, notes the appeal. If the two registers are implemented, "millions of people risk becoming stateless and being sent to detention centers", reads the text. To demonstrate their "citizenship" or the right of residence on Indian soil, in fact, people must produce documents such as deeds of ownership, land documents, graduation certificates, electoral cards, birth and death certificates in the event that the government request them: this is not an easy task in a country where many documents are poorly managed and not digitized.
According to John Dayal, a well-known Catholic human rights activist and a signatory of the statement sent to Fides, "the citizens of the country must not collaborate with the government and not provide any information for the compilation of the registers". Dayal explains: "We ask all state governments to immediately suspend the NPR startup process. We then call on the security forces to respect the constitutional rights of the Indian people to protest peacefully". Many civil society groups and associations across India, Dayal notes, are raising awareness among ordinary people, especially the poor, the dalit and the tribals "on new measures that pave the way for the creation of India as a Hindu nation".
Recently the Indian bishops, in a message released at the conclusion of the 34th Plenary Assembly of the Bishops’ Conference (CBCI), solemnly stated that the Constitution must be protected from "pseudo-nationalism", very different from the authentic "constitutional patriotism" that the Church and civil society defend vigorously. (SD-PA) (Agenzia Fides, 26/2/2020)