ASIA/IRAQ - Iraqi parliamentarians of the Christian component: we will not vote for confidence in the Allawi government 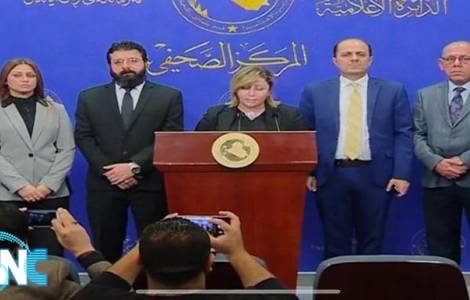 2020-06-18
ASIA/IRAQ: Chaldean patriarch to Christian politicians: it is a difficult time for us, let's meet to face our fears and our future together

2020-06-12
New Prime Minister al Kadhimi visits Mosul and the Nineveh Plain: "Christians, one of the most authentic members of the Country"

2020-04-06
Easter and pandemic, message from Patriarch Sako: May the Lord protect Iraq and the world

Baghdad (Agenzia Fides) - The Iraqi Parliament is preparing to vote on Thursday 27 February for the confidence in the government designated by Prime Minister Mohammed Allawi, but the members of the parliamentary assembly that occupy the five seats reserved for Christian minorities have already announced their intention not to give their vote of support to the new executive. The position of the five parliamentarians was announced by parliamentarian Aswan al Kildani, belonging to the political formation of the so-called "Babylon Brigades", which occupies the seat reserved for Christians in the electoral province of Nineveh.
Aswan Salem, brother of Rayan al Kildani (the founder of the "Babylon Brigades"), in a recent interview with the MBC Iraqi television network said that the five deputies of the "Christian component" will not give their vote of confidence to the Allawi government because the designated Premier had no consultations with the representatives of his respective political formations, and did not disclose the name of the Christian exponent to whom he intends to entrust a ministry in the future government team. Another parliamentarian holding one of the five seats reserved for Christians clarified the reason for the dispute, declaring that the prime minister in charge Allawi intends to entrust a ministry to an "independent" Christian personality; without taking into account the indications and wishes of the political groups belonging to the parliamentarians who occupy the five seats reserved for Christians.
After the last political elections, which took place in May 2018, even Chaldean Patriarch Louis Raphael Sako (see Fides, 16/5/2019) had denounced the operations of the most influential Iraqi political parties, which in the opinion of many observers had placed their emissaries also in the parliamentary seats reserved by the national institutional system for representatives belonging to the Christian component.
According to rumors in the Iraqi media, and also reported on the website ankawa.com, the Christian representative chosen by the Premier designated Allawi to lead the Ministry of Immigration and Refugees is Wiliam Warda. Journalist and leading exponent of the Zowaa Party (Assyrian Democratic Movement), awarded in 2019 by the U.S. State Department at the International Religious Freedom Award.
In recent days, US Secretary of State Mike Pompeo called Iraqi Premier Designated Allawi to ask him to protect the 5200 US soldiers stationed in Iraq. In the political debate preceding the vote of confidence, the Shiite components ask to expel the US military presence from the Country, while the Sunni members together with the Kurdish ones ask to keep the US military contingent on their territory, also in consideration of the role that the American soldiers can play in the fight against the clandestine cells of militants of the self-styled Islamic State (Daesh) still present in Iraq.
In his conversation with Allawi, Pompeo also stressed the urgency with which the next Iraqi government must put an end to the killings of demonstrators and give adequate responses to their requests.
Since last October, Iraq has been undergoing a revolt marked by nearly 550 dead and 30,000 injured, mostly protesters, and which has also led to the resignation of the previous government, led by Adel Abdel Mahdi.
On January 3, 2020, the U.S. apparatuses killed Iranian general Qasem Soleimani in Baghdad. (GV) (Agenzia Fides,25/2/2020)

AFRICA/DR CONGO - Justice and CENI reform: "You reap what you sow" warn the Bishops