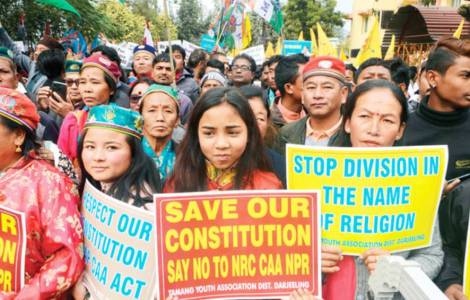 2020-03-26
Connection and compassion: Caritas at the forefront in the fight against the coronavirus

2020-03-25
Christians in India: helping the poorest during the complete lockdown of the nation because of Covid-19

2020-03-10
The kerygma in India: the work of the "National Centre for New Evangelization"

Bangalore (Agenzia Fides) - "Every citizen must be ever vigilant against all attempts to undermine the ennobling human vision of the Constitution so that our beloved country ever remains united and faithful to its values": say the Indian Bishops, in a message released at the conclusion of the 34th Plenary Assembly of the Bishops’ Conference (CBCI), which brought together 192 bishops in Bangalore from 13 to 19 February. "The hallmark of Indian society is pluralism. From ancient times, India has been a mosaic of many religions, cultures and languages with a strong Indian identity", recalls the text sent to Agenzia Fides.
"What unites us - continues the message - is stronger and deeper than what divides us. We are proud of our Constitution that envisions a Sovereign Socialist Secular Democratic Republic which resolved to secure for all its citizens Justice, Liberty, Equality and Fraternity as enshrined in the Preamble". The Bishops recall: "Justice is defined as social, economic and political: while liberty upholds freedom of thought, expression, belief, faith and worship. Equality assures equal status and opportunity. These Constitutional values form the ethos of Indian identity that promotes fraternity, dignity of the individual and unity and integrity of the nation".
The bishops’ assertion came in the backdrop of a raging controversy over the Citizenship Amendment Act (CAA) enacted on December 15, 2019. The amendment aims to provide citizenship to migrants from Afghanistan, Bangladesh and Pakistan, barring Muslims. The Bishops, who deliberated on “Dialogue: The Path to Truth and Charity,” say they join the “framers of the Constitution” to affirm that religion "should not become the criterion to determine one’s citizenship". The Catholic Church has publicly opposed the CAA, also criticizing the National Register of Citizens (NRC) and the National Population Register (NPR), linked to that text of the law, noting that similar acts go in the direction of making India a "Hindu nation".
"We believe that patriotism is different from narrow and divisive cultural nationalism, which is radically different from Constitutional nationalism. Nobody has the right to question patriotism of any citizen on subjective grounds", highlights the message.
Authentic patriotism, they note, "unites people" and "directs citizens' attention to the good of the entire human family" in India. "False nationalistic ideologies that instigate contempt for cultures other than the majoritarian dominant culture, are capable of perpetrating atrocities. It is necessary to clarify the essential difference between patriotism and pseudo-nationalism", adds the note. "Patriotism builds up the nation while pseudo nationalism destroys the integrity, unity and harmony of the nation. Nationalism, particularly in its most radical and extreme forms, is thus the antithesis of true patriotism", they explain.
"We appeal to state authorities to take steps to contain pseudo nationalism so that it does not continue to give rise to new forms of totalitarianism. We Indian Catholic Bishops affirm that religion should not be a criterion for determining citizenship. The authorities should present sincere and effective means of erasing the sense of fear, anxiety and uncertainty that spread throughout the nation, particularly among religious minorities", they say. And they add that "dissent should not be interpreted as un-patriotic "and that "democracy cannot be built on monologue".
The message ends with an appeal for dialogue: "We ask state authorities to sit around the common table, a place of debate and shared hopes. Against attempts to create cultural isolation in our beloved country, dialogue will make the elements that are seemingly a barrier or a wall, a bridge of relationship". Dialogue, at all levels - is the wish expressed -"may it be a source of reconciliation, justice, peace and God's love". (SD-PA) (Agenzia Fides, 20/2/2020)

AFRICA/DR CONGO - Covid-19: fears of a catastrophe in prisons if no action is taken in time