ASIA/INDIA - The innocent seven of Kandhamal, witnesses of faith 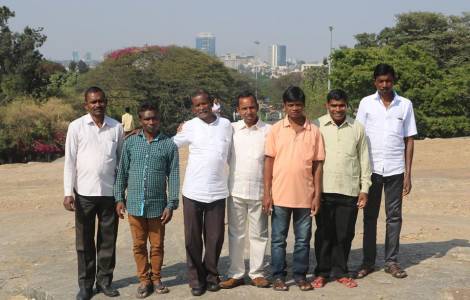 Bangalore (Agenzia Fides) - They spoke of their experience and witnessed their faith in Christ before the Indian Bishops: the seven innocent men - involved in the story of the anti-Christian massacres that took place in 2008 in Kandhamal, in the Indian state of Orissa – who returned to freedom after an unjust 10-year detention, were invited to the 34th Plenary Assembly of the Bishops’ Conference of India (CBCI), which brings together the Bishops of the three rites (Latin, Syro-Malabar and Syro-Malankara) underway in Bangalore.
Christian journalist and activist Anto Akkara, who has visited Kandhamal 25 times, illustrated why seven innocent Christians - six of whom are illiterate, one with mental problems - were kept in prison. They were able to testify their profound faith, despite the difficulties and trials in years of unjust prison.
Akkara explained the conspiracy theory, put together around a desk before the murder of Hindu religious leader, Swami Laxmanananda Saraswati, shot dead in Kandhamal on August 23, 2008. The death of Saraswati, attributed to the Christians, was the pretext to launch the wave of violence against the baptized community. Seven innocents were unjustly sentenced to life imprisonment and imprisoned in 2008 for the alleged murder of Saraswati. The appeal process against the conviction has been ongoing before the Orissa High Court since 2015. After carefully investigating the case, with a field investigation, Akkara revealed the conspiracy in his investigative book "Who Killed Swami Laxmanananda?", published in 2016, and in the same year launched an online signature campaign (www.release7innocents.com) to request the release of the seven. The results of that investigation were presented in court. The seven were recently released on bail.
Akkara urged the Indian Bishops to take their situation to heart and to help them concretely, both materially and spiritually. "Faith must lead to action", he said.
After the presentation of the case, Cardinal Oswald Gracias, Archbishop of Bombay and President of the CBCI, led the prayer for the innocent shared by all the Bishops.
Over the past decade, the Archdiocese of Cuttack – Bhubaneswar which covers the territory of Kandhamal, Orissa, has remained close to the victims and has been the driving force in the legal proceedings, aimed at seeking justice.
Large-scale violence against Kandhamal Christians resulted in over 100 deaths, over 50,000 displaced. More than 40 women were sexually assaulted and around 12,000 children saw their schooling interrupted and denied the right to education. Over 8,000 houses were looted and burned, more than 300 churches demolished. (SD-PA) (Agenzia Fides, 18/2/2020)

AMERICA/BOLIVIA - "House arrest and quarantine elsewhere": Archbishop Juarez's request for detainees in the face of Covid-19