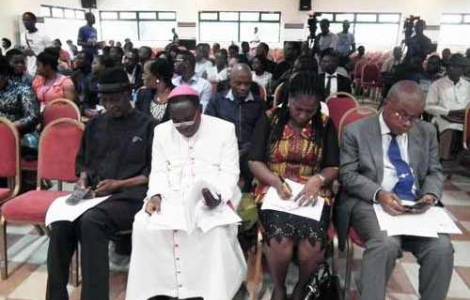 Abuja (Agenzia Fides) - "No one could have imagined that in winning the Presidency, General Buhari would bring nepotism and clannishness into the military and the ancillary Security Agencies, that his government would be marked by supremacist and divisive policies that would push our country to the brink. This President displayed the greatest degree of insensitivity in managing our Country’s rich diversity", His Exc. Mgr. Bishop Matthew Hassan Kukah decried in his homily on February 11 during Michael Nnadi’s burial, the youngest, 18 years of age of the four seminarians kidnapped at Good Shepherd Major Seminary in Kaduna State, Northwest Nigeria, by armed men on the night of January 8 (see Fides, 13/1/2020). The seminarian's body was found on February 1 along with that of another person who had been kidnapped by the bandits (see Fides, 3/2/2020).
Mgr. Kukah recalls that President Muhammadu Buhari was elected in 2015 on the basis of the promise to restore security in the Country but this did not happen and indeed even the citizens of northern Nigeria, where Buhari comes from, contest his policy. "Despite running the most nepotistic and narcissistic government in known history, the north still has the worst indices of poverty, insecurity, stunting, squalor and destitution", said the Bishop. "His Eminence, the Sultan of Sokoto and the Emir of Kano are the two most powerful traditional and moral leaders in Islam today. None of them is happy and they have said so loud and clear. Traditional leaders from the north, who in 2015 believed that General Buhari had come to redeem the north, have now turned against the President", said Mgr. Kukah.
The Bishop also denounced the persecution of Christians in Nigeria by armed groups, primarily Boko Haram. "Are we to believe that simply because Boko Haram kills Muslims too, they wear no religious garb? Are we to deny the evidence before us, of kidnappers separating Muslims from infidels or compelling Christians to convert or die?".
Meanwhile, a few hours after President Buhari's visit to Maiduguri, the capital of the State of Borno, Boko Haram attacked the suburb of Jiddari Polo near the city. Buhari, who was disputed by the residents, had traveled to the capital of the State of Borno to offer condolences for the victims of the attack on Sunday 9 February against motorists stopped for a curfew along a road leading to Maiduguri near the village by Auno. About thirty people lost their lives, most of them burned in their vehicles set on fire by the jihadists. (L.M.) (Agenzia Fides, 13/2/2020)

ASIA/INDIA - The innocent seven of Kandhamal, witnesses of faith

AFRICA/BURKINA FASO - A catechist killed in the north of the Country. Out of 6 parishes in the diocese of Dori, 3 are closed due to terrorism

EUROPE/ITALY - The beatification of Father Cremonesi, martyr, on the eve of Mission Day in the Extraordinary Missionary Month

AFRICA/NIGERIA - "The killing of Fr. David Tanko must push us to put an end to the conflict between the Tiv and the Jukun" says the Head of State