AMERICA/NICARAGUA - Elections, a light of hope for the country that must be nurtured and protected 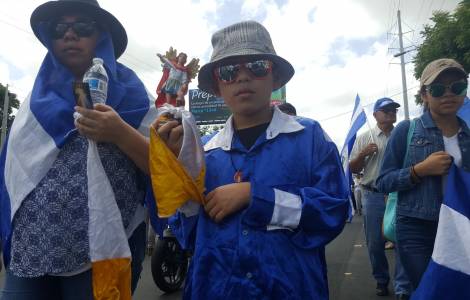 Managua (Agenzia Fides) - Future elections, which have yet to be determined, open a constitutional and peaceful possibility of emerging from the current social, political and economic crisis that Nicaragua is experiencing: this is what the Justice and Peace Commission of the Archdiocese of Managua highlights in a message sent to Fides, which bears the date of 10 February. The event turns on a light of hope for the country, however this light is threatened by protagonism, personal or group ambitions, so the Commission calls on members of civil society to work as true citizens who love their homeland.
In order to succeed in this project, the Commission warns that freedom of expression must be re-established. This entails a "substantial electoral reform, the change of the electoral authorities and a broad national and international observation", reads the text of the Commission, which concludes as follows: "We are in solidarity with the pain of families who suffer for their political prisoners, disappeared, besieged, dead and exiled".
The Bishop of the diocese of Matagalpa, Mgr. Rolando Álvarez, has also asked Nicaraguan political parties to work together for an electoral reform that considers "fair and necessary" in the face of the presidential elections to be held next year. Archbishop Álvarez, in his homily last Sunday, said: "all political parties in Nicaragua have a historical debt with the people, and they have to pay it now. Because it is now that there is an opportunity to do it".
Human rights organizations have documented eight cases of torture in the past few days. The victims are young opponents of the government, attacked by alleged members of paramilitary groups and the police, which constitutes a serious violation of human rights.
Only now have supplies of press material from La Prensa newspaper been delivered, which had been held for 75 weeks, which has slowed down the free work of the media. The news generated positive reactions in organizations defending press freedom and human rights, as well as in media workers, who after experiencing the reduction of advertising and the shortage of supplies, faced the loss of their jobs.
According to Fides sources, the apostolic nuncio also intervened for the delivery of these supplies, necessary to be able to print one of the main newspapers in the country. In addition to the case of La Prensa, according to data from the Violeta Barrios de Chamorro Foundation, between April and December 2018, at least 712 cases of violation of press freedom were recorded, including attacks, censorship, threats and even murders. (CE) (Agenzia Fides, 13/02/2020)