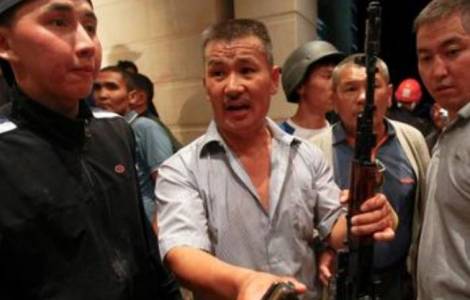 Almaty (Agenzia Fides) - "We pray for all those who have suffered, for those who still suffer, for the deceased and hospitalized. We pray and hope that the spirit of reconciliation among the inhabitants of these populations can be renewed". This is the comment released to Agenzia Fides by Mgr. José Luís Mumbiela Sierra, Bishop of the Diocese of Almaty and President of the Bishops’ Conference of Kazakhstan, on the inter-ethnic clashes between Kazakhs and Dungans, which have shaken Kazakh society in recent days, with the consequent impact of social and political tensions still present.
The violence took place in the Zambyl region, in the southeastern part of the country, on the border with Kyrgyzstan in the night between 7 and 8 February, and resulted in 10 deaths and 170 injured, in addition to the destruction of 25 private houses, 31 shops and 41 cars. The Kazakh Minister of Information and Communications, Dauren Abayev, announced that the accidents were apparently caused by a banal confrontation that took place in the village of Masanci, linked to episodes of daily life.
According to the police version, one of the villagers did not stop when the traffic police shouted halt. Chased by the agents, he allegedly called neighbors and relatives who attacked the policemen. The conflict then widened causing casualties and injuries. According to other local sources, some Dungans apparently attacked an 80-year-old Kazakh elder, with the retaliation of Kazakh men against the population of Dungan-dominated villages.
The clashes then affected several villages, with a prevalent Dungan population. The Kazakh government sent soldiers to the scene that seized rudimentary weapons, while the judiciary launched criminal proceedings with the hypothesis of a crime involving mass unrest, murder, resistance to public officials.
The Dungan population represents 90% of residents in the area, while the Kazakhs and the Russians are both 5% of the society.
Tolerance between religions and ethnic groups is one of the fundamental points of the Kazakh national identity. In the country there is a sort of "superposition" of two cults: a public one, linked to loyalty to the state, and a private one, closely related to religion and ethnicity. This approach is linked to a policy that has proved far-sighted: immediately after the dissolution of the Soviet Union, the economic crisis and the deterioration of state institutions could have triggered an inter-ethnic conflict of enormous proportions. Kazakhstan has managed to avert this scenario by imposing a social model that sees its milestone in recognizing the pivotal role of the State.
The Dungans, a population of Chinese ethnicity and Muslim religion, arrived in Central Asia in the late 19th century to escape persecution by the Chinese authorities. According to official data provided by the Kazakh Ministry of Foreign Affairs, currently, out of a population of 17 million, 70% are Muslims, 26% Christians, 1% of whom are of Catholic faith. (LF-PA) (Agenzia Fides, 12/2/2020)