AMERICA/COLOMBIA - At the service of vulnerable people: pastoral challenges on the border between Colombia and Venezuela 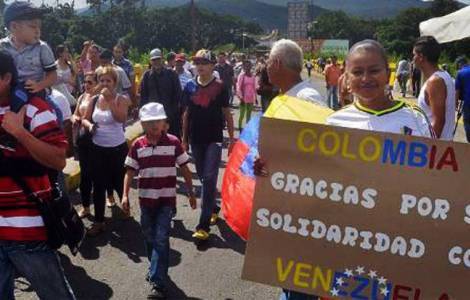 2020-04-06
The testimony of life of Sister Johana, first nun who died of coronavirus in Colombia

2020-03-06
"With Mary, beyond borders": the preparation of the National Missionary Congress proceeds

2020-03-03
Two other social leaders killed in northern Colombia, while President Duque is visiting the country

Cucuta (Agenzia Fides) - Manifesting the Holy Father's concern for border situations, sharing the Church's charitable activities in favor of the most vulnerable people in that context is the objective of the meeting organized by the Department for the Service of Integral Human Development and the Migrants and Refugees Section at the diocese of Cucuta, border with Venezuela. "Caridad en la frontera" is the theme of the meeting taking place from 30 to 31 January 2020.
"Our meeting here in Cúcuta, organized together with the Migrants and Refugees section and in close collaboration with the Secretary of State, Cardinal Pietro Parolin, wishes to make a concrete contribution to analyze the needs and adequately coordinate the help of the ecclesial network in favor of all the victims of the humanitarian crisis", reads a note from Cardinal Peter KA Turkson, Prefect of the Dicastery.
"We are not an NGO: our mission goes beyond mere assistance", underlined the Cardinal in his message during the opening of the meeting. "The field of action of the Dicastery promotes the integral development of man in the light of the Gospel. In particular, our Dicastery is responsible for migration, the needy, the sick and the excluded, the unemployed and victims of any form of slavery and torture. These vulnerable people are those whom the Dicastery is called to serve. The international community does not seem to be able to provide adequate solutions to this immense 'ocean of pain' - says Cardinal Turkson. Together with neighboring countries, representatives of the local episcopates and of ecclesial institutions and religious congregations, the Apostolic Nunciatures, numerous Catholic charitable organizations and NGOs also work at the forefront".
The Prefect of the Dicastery explains the intention to establish "a platform, an information sharing service, through which to obtain a more unified picture of the Church's charitable action in the context of the emergency, identifying concrete guidelines for future interventions, useful for mitigating the humanitarian impact of the crisis. We have seen that this model, which was welcomed by the actors involved in the Middle East, managed to create and consolidate a solidarity network".
The Venezuelan crisis is one of the most serious in recent decades and has reached dramatic levels. According to the latest UNHCR and IOM estimates, the number of Venezuelan migrants and refugees in Latin America and the Caribbean is about 4.5 million, of whom over one million in Colombia, 500,000 in Peru and the rest in neighboring countries with Brazil, Mexico, Ecuador, the United States of America and Spain. (AP) (Agenzia Fides, 31/1/2020)