ASIA/PHILIPPINES - Cardinal Tagle: "To be a gift for the other, following the example of Christ" 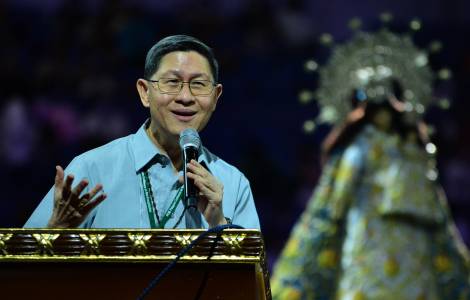 2020-03-24
"National week of prayer": the Bishops invite the faithful to support the doctors on the front line against Covid-19

2020-03-18
The island of Luzon closed due to coronavirus: the impact on the poorest and most vulnerable

2020-03-16
Appeal to Catholics: the coronavirus epidemic can also be won with the Rosary prayer

Manila (Agenzia Fides) - "Welcoming the other as a gift. Being ourselves a gift for the other, following the example of Jesus Christ who is a gift for humanity. He is the greatest gift we have received, and that gift bears fruit: we ourselves are the fruit of his Spirit and his presence, we are those who testify and bring this gift of inestimable value to the world": said Cardinal Luis Antonio Tagle, at the conclusion of the "Philippine Conference for the new evangelization", held in Manila on 28 and 29 January 2020. The event brought together over ten thousand faithful among priests, religious, young people, adults from the parishes of the archdiocese, gathered at the Araneta Coliseum, sports hall of Quezon city, one of the cities that make up the "MetroManila", to give a tangible sign of "community communion" and also to greet Cardinal Tagle, about to begin his work in the Vatican, as Prefect of the Congregation for the Evangelization of the Peoples.
As Fides learns, the Cardinal - focusing on the central theme of gathering, proximity - spoke of the interpersonal relationship, using an image, that of the "weaver": "The Christian - he remarked - is he who weaves with patience, wisdom and grace a human relationship. It is a delicate work, easy to destroy (simply pull a thread) and tiring to carry out. In this sense, dialogue is part of this relationship that means having an open, trustworthy, respectful and brotherly lifestyle towards others, seeing the good that is in him, the seed of God in him". This style, he continued, "is also nourished thanks to human factors such as the simple sharing of a meal; or by listening and playing music, which teaches harmony, as happens in the three notes of a chord. Kindness and friendship towards each person are threads of this fabric and so is a smile, a typical element of Filipino culture, which knows how to see the good, the positive, the action of God even in painful events". "In this work - underlined Cardinal Tagle - the main weaver is the Holy Spirit, who unites people of different languages, cultures, traditions, in his love. We are agents and collaborators of the Holy Spirit, when we participate in this work of weaving among men". In this perspective, he explained, the Church in the Philippines is experiencing the special Year of ecumenism, interreligious dialogue and indigenous peoples that the Filipino Bishops proclaimed in 2020, in preparation for the 500th anniversary of the arrival of faith in the archipelago (1521-2021).
To answer the question "Who is my neighbor?" - continued the Cardinal addressing the vast assembly that listened to him in religious silence - "we must then start by recognizing ourselves as neighbors for others. We can build a world in which the other is my neighbor, to be welcomed and preserved; and I am close to the other. It is an experience that leads us to recognize the uniqueness and preciousness of each person, to recognize oneself as a gift and to see one's neighbor as a gift from God".
"Why does it not often happen?" he asked. "Because there is fear - he said - that feeds violent attitudes, prejudices, hostilities, which can last for generations or have collective recipients, entire peoples. The fear of the other, of the non-Christian is often deduced. It is only by starting from the truth about ourselves, by gestures of humility and repentance, that we can open up to the other and recognize him as a gift. From here comes gratitude to God, for giving us the gift of the other person. This gratitude produces communion, solidarity and responsibility, in taking care of each other. We all carry a need and we are all a gift. You are the gift that responds to the other's need", he noted, quoting the attitude of the Good Samaritan, compassion. And he concluded: "Christ understands and knows our needs and made himself a gift for all of us, offering his body, his blood, all of himself for our humanity. Christ is the greatest gift that inspires our being gift for others". (PA) (Agenzia Fides, 30/1/2020)

AMERICA/VENEZUELA - Home as a "mission land": material to live Holy Week at home

VATICAN - President of the PMS: the Emergency Fund, a sign of the Pope's care for the young Churches affected by the pandemic

EUROPE/ITALY - Ecumenical Message for Easter: "Do not be afraid"