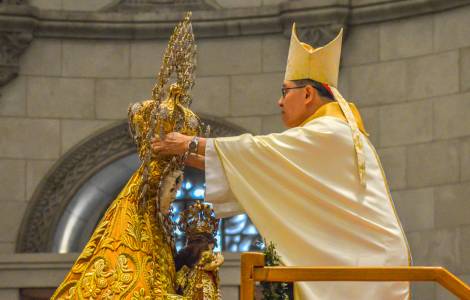 2020-10-27
The work of a missionary for street children in Manila, in times of pandemic

Manila (Agenzia Fides) - "Every action you do is a Eucharistic action. Your life is an endless Eucharist. Everything is done in the name of the Lord Jesus Christ, to thank him for his call, his goodness, his mercy". With these words, delivered with emotion, Cardinal Luis Antonio Tagle addressed the faithful of Manila, celebrating a thanksgiving mass yesterday evening, on January 27, in the Cathedral of the Immaculate Conception. As Fides learns, the church was packed with over two thousand faithful, who came from all over the territory and from over 85 parishes, to share and greet the Cardinal who, in the next few days, will reach the Vatican and take office as Prefect of the Congregation for the evangelization of peoples. Numerous bishops from other Filipino dioceses were present, the presence of priests, religious and catechists, of what is one of the oldest dioceses in Asia, was massive. In fact, while the Church in the Philippines is preparing to celebrate 500 years of the arrival of the Gospel in the archipelago (1521-2021), about 50 years after the first Filipino was baptized (1521), given the impressive growth of the community of faithful, in 1579 the diocese of Manila was established as a suffragan of Mexico City. In 1595 Manila was already archdiocese and today it is made up of seven cities (Manila, Makati, Pasay, Mandaluyong, Pasig, Quezon City, Kalookan) and five municipalities, a territory where over 3 million Catholic faithful live.
In the closing mass, the Cardinal urged to always have an attitude of thanksgiving towards God, Lord of history, because "God's plans are not our plans, but we believe and know that He is good, that his mercy lasts forever". And, added Cardinal Tagle, as Christ thanked the Father, giving all of himself, in the same way "every baptized person, as an act of thanksgiving, is called to give his body and his blood".
Auxiliary Bishop of Manila, Broderick Pabillo who, expressing common sentiments, said: "We feel privileged to have had a Shepherd for eight years who made every effort and gave himself unreservedly to always be at the service of his community. In recent years, despite his international commitments, he has always been present, never failing to be among us. We are grateful to him and will accompany him with our prayers".
The people prayed for the Cardinal, thanking him for "showing the compassion of God with his life".
"We are sad on the one hand because we will miss Cardinal Tagle. He has entered everyone's heart. But we are aware that he represents a gift that the Church in the Philippines makes to the universal Church", said the bishop of Novaliches, Mgr. Roberto O. Gaa, former Rector of the Holy Apostles Senior Seminary of the archdiocese of Manila.
"We have mixed emotions: the most beautiful legacy is his humility and closeness: he was truly a Good Shepherd for us", says Sharon, a Catholic engaged in a parish in the area. "He really took care of us with love", concludes Fr. Abos, an elderly priest from Manila. Cardinal Tagle leaves a thriving diocese with about 600 priests, including diocesans and religious, over 700 nuns, over 400 catechists. (PA) (Agenzia Fides, 28/1/2020)

AFRICA/BURKINA FASO - The National Director of the PMS: "The recognition of the legal personality of the Church is a step forward for a fruitful collaboration"