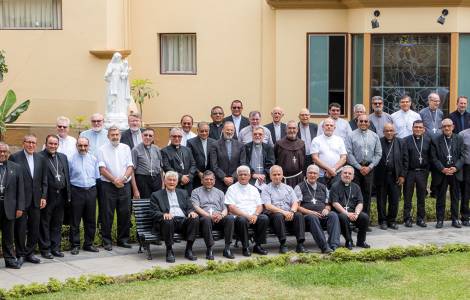 2020-01-24
Message from the Bishops: Elections are a great opportunity to influence the course of events

2020-01-18
Assembly of Bishops: extraordinary elections of parliament on January 26 among the topics under consideration

2019-10-07
Extraordinary Missionary Month: many local initiatives to involve everyone

2019-10-02
In the face of the crisis, Mgr. Cabrejos calls for "political maturity for the 33 million Peruvians

2019-08-26
To welcome, protect, promote and integrate: the Church for the reception of Venezuelan refugees

Lima (Agenzia Fides) - At the conclusion of the 115th Plenary Assembly of the Peruvian Episcopate (see Fides, 18/01/2020), the Episcopal Conference (CEP) has published its message, sent to Fides, which concerns the parliamentary elections of 26 January, 2020. The Bishops remind the national community that "the election of the new Parliament offers citizens a great opportunity to influence the course of events in the Country, expressing a responsible vote, according to their personal beliefs". According to the teaching of the Church, in fact, "politics is a high form of charity. Pope Francis reminds us that politics must be above all at the service of the common good and not be trapped by individual ambitions, nor by the arrogance of groups or centers of special interests. Real policy is to work for the common good".
Finally, the Bishops present a request to future members of Congress: "We urge you to make a commitment to reconnect politics to citizens' concerns, addressing the problems of the Country and placing the fight against corruption, impunity among its priorities, citizens' insecurity, family violence, feminicides, unemployment". The message ends by highlighting the duty of the authorities: "the government must establish adequate and efficient communication channels, with the people and with all the powers of the state, for the good of the Country".
Pope Francis' visit to Peru in January two years ago marked the participation of the Catholic Church in the political and social life of the Country, which intervened on the migration of Venezuelans (see Fides, 13/6/2019) and mediated in the social conflicts, for example (see Fides, 8/4/2019). The Episcopal Conference had outlined a very detailed picture of the national situation in which we read: "We see a systematic process of corruption caused by the divorce between ethics and politics, reinforced by personal and group ambitions, exacerbated by impunity and mistreated by a system that ignores justice. We have reached a point of political break: a new beginning requires not only a change of command but also the ethical and moral recovery of the country at all levels, because high levels of corruption steal hope, especially for the poor and the young", (see Fides, 21/1/2019). (CE) (Agenzia Fides, 24/1/2020)