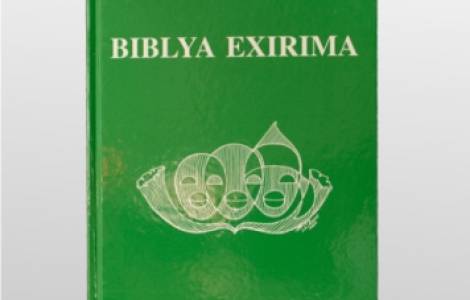 Vatican City (Agenzia Fides) - Sunday, January 26, the first "Sunday of the Word of God" will be celebrated in the world, announced by Pope Francis with the Apostolic Letter "Aperuit Illis", so that "the life of our people be constantly marked by this decisive relationship with the living word that the Lord never tires of speaking to his Bride" (n.2). The Pope stresses that "the Bible cannot be just the heritage of some, much less a collection of books for the benefit of a privileged few. It belongs above all to those called to hear its message and to recognize themselves in its Words" (n.4). In this perspective, many missionaries have dedicated a substantial part of their commitment to evangelization to translations of the Scriptures into local languages, to encourage the growth and formation of Christian communities. We cite just a few examples below.
Blessed Fr. Gabriele Maria Allegra (1907–1976), Franciscan missionary, OFM, is known for the first translation of Sacred Scripture into Chinese. Sent on a mission to China, after studying the Chinese language, the translation of the Old Testament from Aramaic began in 1935, which ended in 1944. Unfortunately, he lost more than half of the text translated during the war, so he called several Chinese confreres to help him. In 1945 he founded the Studium Biblicum Franciscanum in Beijing, which was transferred to Hong Kong in 1948. After completing the translation of the Old Testament in 1952, he went to the Holy Land for a period of formation. Returning to Hong Kong in 1955, he began translating the New Testament from Greek. In 1968 the Studium Biblicum Franciscanum published the Bible in Chinese (Old and New Testament) for the first time in history.
On December 21, 2019 the "Baibil Khumur", the Holy Bible in the Tiwa language, was officially published. The Tiwa or Lalung community is an indigenous tribe that lives mainly in the Indian states of Assam and Meghalaya, in north-eastern India, and also in some parts of Arunachal Pradesh and Manipur. The translation work was led and coordinated by the Salesian (SDB), Fr. UV Jose, who worked on it for over five years spending up to 14 hours a day. Before him, another Salesian, Fr. Michael Balawan, had translated the New Testament into Tiwa, as well as writing a Tiwa-English-Khasi dictionary and editing several books on religious subjects.
Fathers Piergiorgio Cappelletti and Mario Frigerio, PIME missionaries, have lived and worked in Cameroon for half a century, and a significant part of their missionary commitment has poured into the translation of the Word of God into the language of the Tupuri. They translated the Sunday Lectionary and the New Testament, and are working on the Old Testament. Also in Cameroon, Father Giuseppe Parietti translated the Deuterocanonical books and the festive Lectionary into Fulfuldé, while Father Antonio Michelan translated the Bible and the Sunday Lectionary in Guiziga. The translation of the liturgical texts into the language of the Santal ethnic group is due to Father Carlo Calanchi, a missionary in Bangladesh. While in Guinea Bissau Father Luigi Scantanburlo worked on the translation of the liturgical and New Testament texts into the Felupe language; in Balanta some Gospels; in Criolo some liturgical texts, of the New Testament and the entire Bible (in collaboration with the Evangelicals). Father Giovanni De Franceschi, missionary in the Ivory Coast, translated the liturgical texts into Baulé.
In Mexico, after 25 years of work, in 2015 the translation of the Bible into the Tzotzil language was completed, a language that comes from the Maya and is spoken mainly on the Chiapas plateaus, by the peoples of the Tzotzil ethnic group, about 350,000 people. The work was carried out by the Missionary priests of the Sacred Heart and Santa Maria di Guadalupe, together with some priests from the area and especially the catechists of the parishes. In Guatemala in 2011 the Bible was published translated into k'iche, the most popular of the 22 main languages in the country, the result of the work of a group coordinated by the French priest Bernardo Guos and Isabel Sucuquí, of Mayan language, originally from Chiché, El Quiché. The translation of the Scriptures was done but from the original language, through a process of constant revision by k'iché catechists, to reach the final text of a Bible that allows reading without the help of other languages.
In the 1960s, the Consolata Missionaries (IMC) collaborated on the translation carried out by the local Church, in Kenya and Tanzania, of the Bible in Kiswaili, Kimeru, Kikuyo. Giuseppe Frizzi oversaw the Xirima translation of the Macua people in Niassa, Mozambique. The translation was revised by the "Centro de Inserção Makhuwa-Xirima", center of cultural and artistic studies founded by him in the mission of Maúa, and was published by the Diocese of Lichinga, published by the Consolata Missionaries. The publication of the Gospels took place in 1997 and of the complete Bible in 2000, on the occasion of the Great Jubilee of the year 2000. Fr. Frizzi in this regard recalls an anecdote: "When I finished translating the Bible in Maca-Scirima language, an authoritative Muslim cheikh of Maúa, named Txirani: asked me if I could also translate the Koran. I had to turn down the invitation because I do not know Arabic, but I greatly appreciated his request: it expressed both his full trust in a Christian and his desire to make the sacred text of Muslims available in the local language, a desire born from appreciation for the work of Christians, who translate the Word of God into the various languages of the world". (SL) (Agenzia Fides, 24/1/2020)

AFRICA/KENYA - "Do not keep the Bible on shelves, but read it, meditate on it and then put into practice the Word of God"