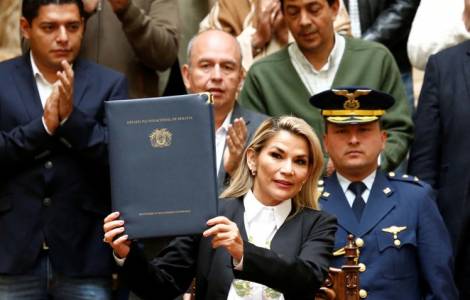 2020-05-14
"We must know if this government is interested in life", asks Mgr. Centellas on Journalist's Day

2020-05-06
The Bishops: a new date for the elections so as not to endanger the health and life of Bolivians

2020-04-17
Religious close to the people of God in many ways during the pandemic, expression of a "Church that goes forth"

La Paz (Agenzia Fides) - "In this historical moment, in this pre-election period, when we are preparing for new elections, we need political parties to be able to present promising projects for the Country, where the priority is to seek the common good, the growth and well-being of our people. In the face of uncertainty, let us try to be artisans of peace, artisans of reconciliation and artisans of the common good": said the executive secretary of the Commission of the Ecclesial Communion of the Episcopal Conference of Bolivia, Fr. Diego Plà, during the Eucharistic celebration last Sunday, in view of the elections of May 3rd.
Mgr. Eugenio Scarpellini, Bishop of the Diocese of El Alto and National Director of the Pontifical Mission Societies, interviewed by a local television, said: "Once again, as a Catholic Church, we hope that the electoral process is carried out as peaceful and democratic as possible ... The people need to recreate trust in the authorities, they need a transparent process, to look to the future with new rulers elected by the people and who think of the common good and truly positive development".
Bolivia celebrated Plurinational State Day yesterday, January 22nd, and for the occasion interim President, Jeanine Añez, asked to draw up a plan to ensure the security of the vote in the upcoming elections on May 3, 2020. "I asked the defense and national government ministers to organize a common plan before, during and after May 3, so that the vote of the Bolivians is protected", she said in a message to the country on this occasion. The celebration of the Dia del Estado Plurinacional has been taking place every year since 2009, when, according to the new Constitution, Bolivia ceased to define itself as a republic.
Jeanine Áñez, who took over the presidency after the anomalies discovered in the last elections, stressed that, precisely for these reasons, "the elections of May 3 will become the best accompanied Bolivian electoral process and most observed in our history". The OAS, the United Nations, the European Union and the Catholic Church have expressed their desire to support and accompany the electoral process. (CE) (Agenzia Fides, 23/1/2020)