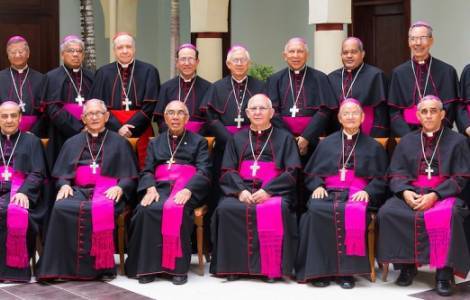 2020-09-19
The Archbishop of Santo Domingo: Church and government must work together in the fight against crime

2020-02-28
The Bishops: without a deep love for the homeland it is impossible to carry out the project of the founding fathers

Santo Domingo (Agenzia Fides) - The Dominican Episcopal Conference (EDC), in its pastoral letter entitled "2020 Elections: space for participation and commitment", which bears the date of January 21, "on the 60th anniversary of the pastoral letter of January 1960", invites candidates in the municipal elections in February and in the general elections in May, to present proposals based on the solution of the most urgent needs of the Dominican people, "avoiding intrigue, slander and manipulation of the so-called dirty campaigns, as well as the waste of economic resources in excessive advertising".
In the long and detailed 24-page document, sent to Agenzia Fides, the Bishops recall that on the agenda of the concrete actions of the candidates there must be the fight against administrative, public and private corruption, the defense of the life of the mother and the unborn child, urban and family violence, climate change, respect for the legal and constitutional order. In addition, immigration management policies, investment in health, justice and social security, employment policies, fair wages and poverty reduction are needed.
The Central Electoral Council "deserves our support and that of all Dominicans, especially in order to guarantee a transparent electoral process", as "we cannot admit the corrupt and illegal practice of buying and selling ballots in front of everyone, without taking action against this electoral offense".
To those who question the Church's right to express its opinion on political issues or electoral processes, the Bishops respond: "as Dominicans and Pastors of this people, we are concerned about everything that is about the human being". The Church respects the freedom of choice, that voting is a right and a duty of conscience that must not be motivated by personal interests and that a true democratic exercise is possible only in a rule of law where the law prevails "above of short-term and accommodating interpretations".
In their letter, the Bishops expressed the desire for political leaders to sign a national commitment pact on priorities for Dominican society, "drawing up a national and provincial agenda that goes beyond personal and group interests in favor of the collective well-being of the nation".
This year the Dominican Episcopal Conference commemorates the 60th anniversary of the pastoral letter published in January 1960 against the regime of Rafael Leónidas Trujillo, signed by the six Bishops of that time, who "in the exercise of their prophetic mission", raised their voice to demand the defense of human rights, respect and promotion of life and human dignity. That document "radiated light at a critical moment in national life, characterized by the generalized suffering imposed by tyranny". Even if today we live in a different situation, the Bishops point out, "there are still many obstacles to overcome in order to obtain a better quality of life for all and for a social recomposition". (SL) (Agenzia Fides, 16/1/2020)