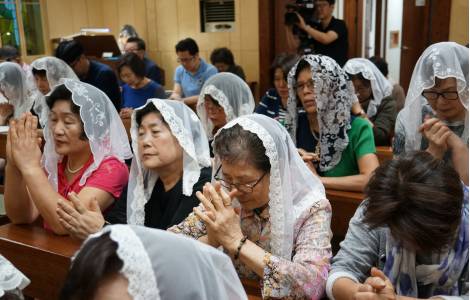 Seoul (Agenzia Fides) - The number of Catholics in South Korea has steadily increased over the past two decades: according to the report issued by the Catholic Pastoral Institute of Korea and sent to Agenzia Fides, the number of Catholic Christians here increased by 48.6 percent, from 3.9 million in 1999 to 5.8 million in 2018 and today make up 11.1% of the overall population in Korea.
Specifically, the diocese of Suwon, logged the highest increase rate of 89.1 percent in the 20-year period, followed by Daejeon (with 79.6 percent) and Uijeongbu, north of the capital, (with 78.9 percent).
The year-to-year growth rate in Catholics has gradually slowed to below 1 percent. In 2000 and 2001, the Catholic population grew 3.2 percent and 3.9 percent, respectively, before falling to the 2 percent range until 2009. The growth rate dropped to 1.7 percent in 2010 and briefly rebounded to 2.2 percent in 2014 due to Pope Francis' visit to South Korea. It then settled around 1% per year.
As for the ratio of Catholics in the nation's total population rose from 8.3 percent to 11.1 percent in the 1999-2018 period. But their mass attendance rate, considered a key indicator of existing believers' religious life, tumbled by more than 10 percentage points: from 29.5 percent to 18.3 percent during the period.
The report says: "The steep fall in the Sunday mass attendance rate is noteworthy. All dioceses have made various efforts to bring back tepid Christians and overhaul the church, but any significant change has yet to come", such as to affect the overall percentages. The Institute then invites us to "reflect on our current missionary work and reconsider the direction of domestic evangelism", he said.
According to the document sent to Fides, another factor to consider is the rapid aging of the Catholic population.
Between 2003 and 2018, Catholics younger than nine years old and in their teens made up 32.4 percent and 33.2 percent, respectively. But those in their 50s, 60s, 70s and 80s expanded by 76.9 percent, 93 percent, 117 percent and 251.6 percent, respectively.
Meanwhile, the number of nuptial masses also decreased 41.5 percent from 24,227 in 1999 to 14,167 in 2018.
The number of priests increased 52.2 percent from 2,972 to 4,456 over the same period, though the number of seminary students fell 17.7 percent from 1,547 to 1,273. The number of overseas missionaries dispatched by Korean Catholic churches surged 204.2 percent from 356 in 1999 to 1,083 in 2018. (SD-PA) (Agenzia Fides, 15/1/2019)

AMERICA/PERU - Migrants: we need complete and fair immigration policies, no to xenophobia and discrimination in society