ASIA/PHILIPPINES - Prayer intensifies while a "volcanic tsunami" is at risk 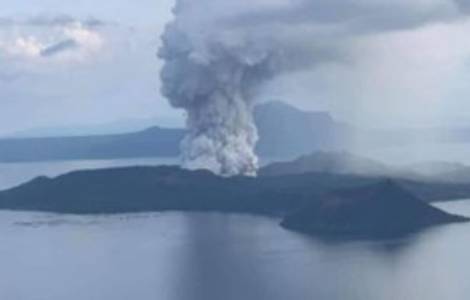 Manila (Agenzia Fides) - While Manila and many adjacent provinces are preparing for the eruption of the second most active volcano in the country, the Taal, near Manila, Catholic faithful intensify prayers for the safety of populations at risk. A huge ash cloud was seen this morning from the central crater of the volcano which is 60 kilometers south of the capital of Manila, obscuring the sky. "We pray for the safety of people living in areas close to the Taal volcano", said Mgr. Pablo Virgilio S. David, Bishop of Caloocan and vice president of the Episcopal Conference of the Philippines.
The Taal, about 40 miles south of Manila, has begun to show signs of activity. Shocks were felt on the volcano island and in the villages around the nearby town of Agoncillo, in the province of Batangas, where thunderous noises from the volcano created fear among the residents.
Tens of thousands of people have been evacuated from their residences and communities. The government ordered schools and public offices to close on January 13. The authorities also issued a public warning for the central Luzon region, which includes seven provinces: Aurora, Bataan, Bulacan, Nueva Ecija, Pampanga, Tarlac and Zambales, on the central island of Luzon. The alarm also applies to the Calabarzon region which includes five provinces: Cavite, Laguna, Batangas, Rizal, Quezon and Lucena, in addition to the Metro Manila region.
The Philippine Institute of Volcanology and Seismology raised the alarm level for the Taal Volcano to level four (out of five), stating that "a dangerous explosive eruption is possible in a few hours or days".
The Institute warned that the eruption could cause a "volcanic tsunami" and advised neighboring communities to take precautions against possible waves from the lake surrounding the volcano. About 6,000 people live on the island and on Sunday the local population was transferred safely to Batanga.
Due to the warnings about the "volcanic Tsunami", the government advised people to stay indoors for health reasons because, following the eruption, the ashes are very harmful to health, containing particles with carbon dioxide, sulfur dioxide, fluorine, hydrochloric acid.
The Philippine archipelago is located on the so-called "ring of fire" of the Pacific, where tectonic plates collide, causing earthquakes and regular volcanic activity. In January 2018, tens of thousands of people were evacuated due to an eruption of Mont Mayon, in the central region of Bicol. The last eruption of the Taal dates back to 1977. The biggest eruption that hit a densely populated area was that of the Monte Pinatubo volcano in June 1991. (SD) (Agenzia Fides, 13/1/2020)

ASIA/INDONESIA - Covid-19, outbreak in the Catholic Church of Medan, the Archbishop in hospital