AMERICA/PUERTO RICO - The earth does not stop shaking, destruction and fear everywhere 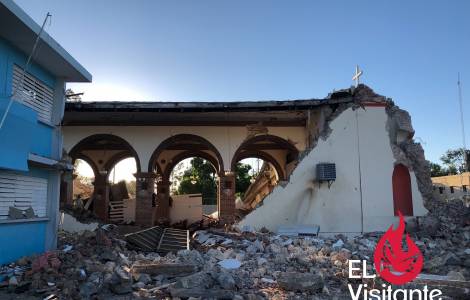 2020-01-08
The earth does not stop shaking, destruction and fear everywhere

2019-11-09
The Bishops: "We need political leaders who work coherently and for the people"

Ponce (Agenzia Fides) - The land of the island of Puerto Rico continues to tremble due to a series of earthquakes that have taken place since the end of December, and the population sleeps outside their home, in cars or on the street. The cities of Ponce, Guanica and Guayanilla are almost all destroyed, even the capital itself, San Juan, has suffered numerous damage to public and private infrastructure. Puerto Rico is used to hurricanes, but not to earthquakes, and although only one dead person and many injured has been recorded, a first report of the assistance centers informs of the destruction of the main historical buildings of the island, including the parish of the Immaculate Conception of Guayanilla.
The editor of the El Visitante newspaper, Enrique Lopez, has sent a series of photos to Fides that give an idea of what happened: entire buildings and houses reduced to rubble, without walls or without the first floor because it collapsed, broken water pipes, national roads interrupted by landslides ... Such episodes, according to American agencies, had not been seen for a century. The first in the series of earthquakes that hit the island of Puerto Rico occurred on December 28, the second on January 6, while yesterday, January 7, another strong 6.4 magnitude earthquake rocked the island. In these days the earth has never stopped shaking, hundreds of small shocks have followed.
In these moments of fear, the Catholic community has come together to give comfort and assistance to the population. The parish of the Immaculate Conception in Guayanilla has collapsed. Nobody was injured, the tabernacle was rescued through the rubble.
Along the Caribbean Sea, in Guanica, the Dominican nuns of Our Lady of the Rosary of Fatima, who are close to the epicenter, are frightened and particularly worried about the elderly sisters of the convent, who were forced to stay in the country tents set up in the street gardens.
Just over 2 years have passed since the island was plagued by the hurricane, and the population had managed to restore many damaged structures (see Fides, 16/11/2017), but the phenomenon of earthquakes is not part of the culture of local disasters and people are not prepared to deal with them. There is currently no electricity or water in some cities, and restoring these services will not be as straightforward as when a hurricane passes.
According to the testimony of the missionaries and religious women, sent to Fides, there is still a positive spirit and a great faith in the population, although it is still not possible to identify the end of this natural disaster. (CE) (Agenzia Fides, 8/1/2020)