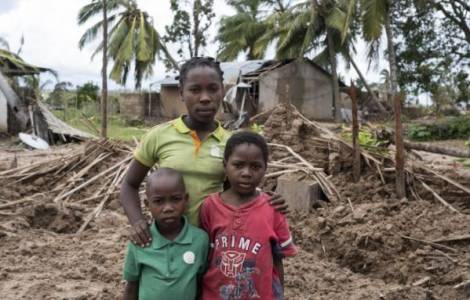 2021-03-30
Hundreds of people evacuated from Pemba, where the situation is uncertain; concern for the children in the area

2021-03-04
The Cabo Delgado tragedy, a problem not only in Mozambique but in all of southern Africa

Beira (Agenzia Fides) - The population is on the verge of famine and the humanitarian emergency does not cease: this is the alarm launched by the White Fathers, nine months after cyclone Idai hit Mozambique causing serious floods and leaving a trail of destruction. The cyclone killed more than a thousand people (602 in Mozambique, 344 in Zimbabwe, 60 in Malawi) and the most affected city was Beira. The overflow of the Buzi and Pungue rivers submerged entire villages which remained isolated for days. Since then life has slowly recovered, but we still live, on the eve of Christmas, in a state of humanitarian emergency.
John Itaru, bursar of the White Fathers in Mozambique, visited the areas of Beira, Dombe, Sussundenga and Tete and told Fides: "Beira has been seriously affected. The city has been brought to its knees. Now life seems to be slowly returning to normal. Our communities have only been slightly damaged. Except for Nazarè where our catechetical center is located. In that area, in the days of the hurricane, strong winds and torrential rains destroyed the roofs. There and in other areas it is precisely the sheet metal roofs torn and thrown to the ground by the gusts of air that caused numerous victims".
In the weeks after the hurricane, aid from other African countries, Europe and North America arrived in Mozambique. This allowed the Mozambicans to recover, but now, after several months, many donors are gradually leaving the country. "Most people - continues Father John - especially those who live in the fields, still need help. There is no crop, infrastructure has been destroyed. Most of these people, who now live in refugee camps, are not allowed to return to their half-destroyed and dangerous homes. Some fields of Dombe, Tete and Beria are in terrible conditions and there are no basic conditions for living a dignified life. They are asked to start a new life in areas of resettlement, but for these people it is not easy to go to areas they do not know".
The White Fathers are doing their best to help the populations in the fields of Dombe, Beira and Tete: "In Tete - concludes the missionary - the situation is very difficult. Only the necessary aid has arrived here. We are working hard to bring food, clothing and, above all, clean water. There is a risk of spreading diseases. We launch an appeal: Continue to support aid in Mozambique. The population really needs it!".
Since last April the number of people in urgent need of food aid in order to survive in Mozambique, hit by the two cyclones Idai and Kenneth, has increased by over a quarter, from 1.6 million to 2 million people. The worsening is due in part to the consequences of climate change, which has resulted in a severe drought in the south of the country, while violent armed clashes are tearing the north of Mozambique apart. The dramatic situation mainly affects small farmers. Oxfam notes that "hunger now risks decimating the population that survived cyclone Idai". (EC) (Agenzia Fides, 21/12/2019)

AFRICA/DR CONGO - The White Fathers: with the arrival of Covid-19, risks of epidemic and famine