AMERICA/MEXICO - For many, migration has become the only option to save one's life 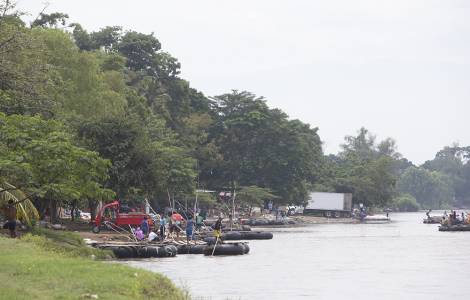 2020-01-27
"Violence against the latest caravan of migrants", denounces a priest

2020-01-20
The Bishop of Tapachula: in the face of the ambiguous and hesitant official position, it is important to "see, listen to and treat migrants as brothers"

2020-01-18
Week for Christian unity: "a unity that does not exclude anyone, especially the most disadvantaged, and among these migrants"

2020-01-09
Bishops appeal at the beginning of the year: let us stop war and violence, the result of intolerance and interests

Madrid (Agenzia Fides) - "New faces, very dynamic. Migration processes in Mexico" is the title of the report presented in Madrid on the occasion of the International Day of Migrants, which is celebrated today by Entreculturas, a Spanish Jesuit NGO for cooperation and development. The data was collected by the Organizations Documentation Network Defense of Migrants (Red de Documentación de Organizaciones de Defensoras de Migrantes, REDODEM), which includes 23 hostels, houses, rooms, canteens and organizations distributed in 13 states in Mexico.
According to information sent to Fides, REDODEM has registered over 36,000 people, most of them men, registered in the south of the country. The majority age group is made up of working age people, which demonstrates the impossibility of maintaining an economic activity in the countries of origin, condemning these people to exile. The most vulnerable are pregnant women and 3,881 children and adolescents, who represent 10.7% of the total data. 57.7% of children travel alone. Girls and adolescents are much more exposed to risks during the trip than boys.
Elisabeth Figueroa Ruiz, technical secretariat of REDODEM, presenting the report to the press, explained that, in addition to the accompaniment, the goal of the network is to record and document the situation of people in mobility, as well as the crimes and violations of human rights committed against them, in order to base advocacy actions, change policies and have an approach to human rights. The difficult situation of migrants is aggravated by the migration policy implemented in Mexico during the administration of Peña Nieto, which demonstrated the lack of institutional interest in responding to the needs of people in mobility according to an approach based on human rights. Although Mexico has signed the Global Pact on Migration, at an international level, its national policy remains dominated by an approach based on security and the criminalization of migrants.
Sister Magdalena Silva Rentería, coordinator of REDODEM, as well as founder and current director of the "Home for reception, training and empowerment of migrant and refugee women" (CAFEMIN), underlined the role and impact of the media in the xenophobic campaigns of criminalization of migrants, human rights defenders and reception centers. "So far in 2019 there have been 9 documented cases of National Guard interventions in these centers, which have resulted in a systematic violation of the human rights of migrants". Sister Magdalena also highlighted the situation on the southern border of Mexico, characterized by "mass overcrowding in inhuman situations, with which the government tries to stop the migration flow", and at the northern border with the United States, where "the same situation of overcrowding occurs and where, after numerous unsuccessful attempts to request refugee status, people are deported to their countries of origin".
The reality of the migratory flow in Mexico is complex, and it is very difficult to differentiate the reasons for departure, as the causes are many: economic reasons, precariousness of life, institutional deficiencies, climate change and widespread violence. Thus migration has become the only option to preserve one's life. (SL) (Agenzia Fides, 18/12/2019)

AMERICA/MEXICO - Reaching out to migrants: joint initiative of the frontier dioceses of Brownsville and Matamoros