ASIA/PHILIPPINES - Cardinal Tagle, gift of the Church in the Philippines to the universal Church 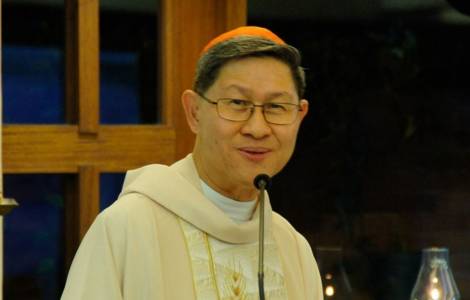 2019-12-23
Terrorist violence on Christmas eve: attack in front of the Cathedral

Manila (Agenzia Fides) - Cardinal Luis Antonio G. Tagle is "a great gift from the Church of the Philippines to the universal Church", said Archbishop Gabriele Caccia, Apostolic Nuncio in the Philippines, commenting to Fides the appointment of the Archbishop of Manila as new Prefect of the Congregation for the Evangelization of Peoples. The Nuncio, who concelebrated with Cardinal Tagle the Mass for the solemnity of the Immaculate Conception in the Cathedral of Manila, noted: "What I appreciate about the Filipino people is that they always smile even if they suffer in their hearts. The Cardinal now smiles, but we know that his heart is broken, because he will have to leave the Archdiocese". Caccia added: "Mary said her yes to God. The Cardinal said his yes to God's call, which came through the Pope. Each of us must say yes, because God knows what is good for each of us. I would like our yes to be like the yes of Mary, who recognized God's will for her life, source of true happiness".
"Today - the Nuncio continued - the Church in the Philippines entrusts and gives Cardinal Tagle to the universal Church: to him the task of taking care not only of the community of a diocese, but of the whole world, for the work of evangelization. We offer the most beautiful gift we have had. We give with an open heart, even if our heart is suffering a little, but we give with joy", remarked Mgr. Caccia.
"The Cardinal knows the extent of the responsibility entrusted to him. And, like Mary Immaculate, he trusts the Lord by saying: Here I am, I am only a servant of the Lord, be done according to Your word", he concluded.
After the official announcement of the appointment, many faithful in the Archdiocese of Manila expressed their sadness at the Cardinal's imminent departure and promised to accompany him, in his new service, with prayer. The faithful consider the appointment of Tagle as a "mission that goes beyond borders, to serve the Lord". "We pray that the Lord will continue to enlighten and protect our beloved Cardinal Tagle on his journey to a world mission, to bring the Good News as Prefect of the Congregation for the Evangelization of Peoples", says to Fides Christine Regnim, a Catholic secular of the Archdiocese of Manila. (SD-PA) (Agenzia Fides, 12/12/2019)

ASIA/PHILIPPINES - Cardinal Tagle: "Announcing the Gospel means communicating the presence and compassion of Christ with life"