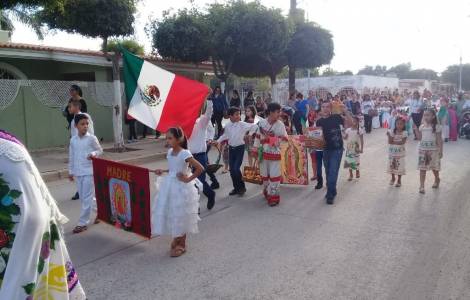 2020-02-17
From the sanctuary of Guadalupe, Archbishop Dal Toso starts the preparation for the continental missionary event, CAM 6

2020-02-15
New tools of discernment for animation, formation and missionary cooperation on the continent

Mexico City (Agenzia Fides) - Everything is ready to celebrate the 488th anniversary of the apparitions of Santa Maria of Guadalupe al Tepeyac. According to data released by the Basilica of Guadalupe in Mexico City and by the government of the capital, tomorrow, December 12, an influx of about 10 million pilgrims from all over the world is expected. According to the same source, this is the place of Marian pilgrimage that gathers more people each year, about 20 million.
The note sent to Fides mentions the comparison with the Basilica of St. Peter in the Vatican, which receives about 18 million. Last year the forecasts were similar, about 10 million were expected on December 12, instead 12 million came.
The Mexico City administration has ordered the deployment of 3,100 police officers for this day, while reception centers are full, parishes and Catholic schools have also prepared camping tents to welcome pilgrims who do not find where to sleep. The Archdiocese has 17,000 volunteers to guide pilgrim groups. Even the police of neighboring states have helped to avoid heavy traffic, close roads and highways, to allow groups of pilgrims to travel more easily to the Basilica.
Beyond data and logistics, the Mexican and American people celebrate this great celebration of the "Morenita del Tepeyac" as a profound expression of Latin American devotion to the Virgin Mary that appeared to Juan Diego, a Mexican native symbol of the poor faithful.
Last Sunday, December 8th, the Archbishop of the capital, Cardinal Carlos Aguiar Retes, had invited the Mexican community to respect the lives of women following the example of Juan Diego.
"We can live happily being Catholic, but this is not enough, just look at our society, there are meaningless murders, murders only because of being a woman. All this must be condemned and every case denounced. The rights of women must be defended because they were created like men, in the image and likeness of God", said the Cardinal. "When a man abuses a woman, he degrades himself", he concluded.
The editorial of the archdiocese's weekly paper follows the same line, and criticizes the proposal to separate men from women on the capital's transport, to avoid sexual harassment or violence against women. "If in society it is necessary to separate men from women on public transport, this is a sign of an illness", the Archdiocese complained. (CE) (Agenzia Fides, 11/12/2019)

AMERICA - On Easter Sunday the consecration of Latin America to Our Lady of Guadalupe, to invoke the end of the pandemic