AMERICA/NICARAGUA - Mgr. Baez celebrated the feast of the Immaculate Conception with the Nicaraguan community of Miami 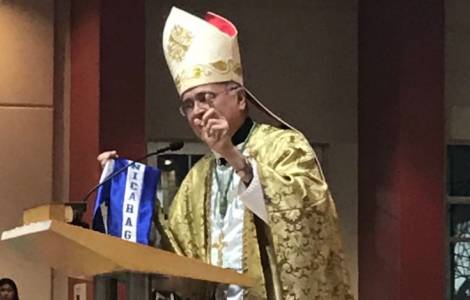 2020-07-22
Mgr Alvarez on the national situation: "Need to build a country where the dignity of the person is respected"

2020-07-16
The Archbishop of Managua postpones the feast of Santo Domingo, the feast of the capital, due to the pandemic

Miami (Agenzia Fides) - Mgr. Silvio José Baez, Auxiliary Bishop of Managua, who currently resides in the Vatican, was invited by the parish of Sant'Agata in Miami (USA) to celebrate the feast of the Immaculate Conception of Mary, 8 December. He was welcomed by hundreds of Nicaraguans who live there and maintain their religious customs unchanged. The feast of the "Purissima", as the Immaculate Conception is called in Nicaragua, in fact is very much felt and is celebrated with devotion and great celebration throughout the country. For this reason the Nicaraguan community that lives in Miami had the presence of the Auxiliary Bishop of Managua, to live with him this event of faith that binds the Nicaraguans wherever they are in the world, as reported in the note sent to Fides.
In the celebration, we prayed in a special way for this suffering country, and Mgr. Baez asked President Ortega, the Vice President, his wife Rosario Murillo, to lower the tone of the aggressive language they use, and to remember that "nobody lives in eternity. They ask themselves what legacy they want to leave behind. It is important to find meaning in one's life, to be able to say in the end: it was worth living and people remember me not with hatred or resentment, but with gratitude - said Mgr. Báez - "I think it is time to think in this way. No one is eternal, even power ends. No power is eternal, but as the Psalm alone says 'the Lord has always existed and lives forever'."
The parish of Sant'Agata in Miami is located very close to a neighborhood called "little Managua" due to the large number of Nicaraguans who live there and visit the place. After Mass, Mgr. Baez met the Central American community and commented that "what happens to the Church in Nicaragua is the same thing that happens to the Catholic Church in the history of humanity".
"The important thing is that we Christians do not experience these moments as victims, nor with revenge, hatred or resentment - underlined the Bishop -. We live them as an opportunity to give witness to Jesus Christ. We live them as a moment that strengthens us in faith and helps us to grow in trust in the Lord so as not to diminish our ministry of the truth of peace and justice".
Then Mgr. Baez reminded those present that no one gives credibility to what Ortega said about the Bishops, on 19 July 2018: "the Church with the coup bishops, are hiding terrorists in churches". "I have been in Europe for seven months, and nobody has believed in that story of the Church that wants the coup d'etat, of the terrorist priests, of the churches that gave shelter to those who were killing the people" Baez. (CE) (Agenzia Fides, 10/12/2019)