ASIA/PALESTINE - Cardinal Parolin: the end of the restoration of the Nativity in Bethlehem is a "call to peace, fruit of justice" 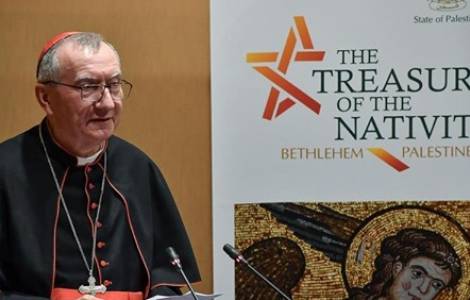 Bethlehem (Agenzia Fides) - Baby Jesus, born in Bethlehem, is "the Prince of Peace", and for this reason the completion of the restoration work on the Basilica of the Nativity in Bethlehem "also becomes a call to peace, exhortation to peace, commitment to peace. In Holy Land, first of all peace as the fruit of justice, peace reached with difficulty but tenaciously through readiness to reconciliation, mutual respect, the will to dialogue, love". During the ceremony for the presentation of the completion of the restoration of the Basilica of the Nativity, Cardinal Pietro Parolin, Secretary of State of His Holiness, concluded his speech with this call to peace in the Holy Land. The initiative, organized by the Embassy of the State of Palestine to the Holy See, took place on Thursday 6 December in the Conference Room of the Vatican Museums. The event, marked by musical moments and the screening of short documentaries on the restoration campaign, saw brief speeches by Palestinian Foreign Minister, Riyad al Maliki, by Mrs. Barbara Jatta, Director of the Vatican Museums, by the Ambassador of the State of Palestine to the Holy See, Mr. Issa Kassissieh, of Mr. Ramzi Khoury, Director of the High Presidential Committee for the Management of Churches in Palestine, of Father Ibrahim Faltas ofm of the Custody of the Holy Land and of Mr. Gianmarco Piacenti, CEO of the Italian restoration company Piacenti Spa, who took care of the challenging work of restoring the Basilica.
In his speech, Cardinal Parolin took the opportunity to thank the ecclesial teams responsible for the management of the Bethlehemian Basilica (Greek Orthodox Patriarchate of Jerusalem, Franciscan Custody of the Holy Land and the Armenian Apostolic Patriarchate of Jerusalem) who in the organization of the restoration work "offered a beautiful testimony of collaboration", and Palestinian President Mahmoud Abbas" who took the project to heart". The "patient, competent and accurate work of restoration" the Cardinal emphasized, "brought back to the eyes of all the splendours of the Basilica of the Nativity. Certainly the lovers of history and art are pleased, who can return to admire the treasures of this monument, a distinguished heritage of humanity. But above all we believers rejoice, because the interventions carried out with skill and love allow that holy place so dear to Christianity to make the mystery that it preserves, the mystery of God made man for us men and for our salvation shine even more".
Citing the recent document on the Nativity scene signed by Pope Francis in Greccio on Sunday 1 December, Cardinal Parolin added that "we feel attracted by the humility of he who became a man to meet every man, and invited to discover that he loves us so much as to join us so that we too can unite with him". In his speech, Ramzi Khoury confided his desire to «bring, on behalf of President Mahmoud Abbas, a special and personal invitation to His Holiness Pope Francis to visit Palestine next year» for the official celebration of the end of the restoration of the Basilica of the Nativity, while Minister Riyad al Maliki said in his speech that he was born in a house facing the Nativity of Bethlehem and had attended the adjoining Franciscan school as a boy. The director of the Vatican Museums, Barbara Jatta, in her speech also focused on the fragment of the wooden manger where according to tradition the little Jesus was born, donated as a relic last November 22 at the behest of Pope Francis, in Bethlehem, and now guarded at the church of Santa Caterina.
The restoration of the Basilica of the Nativity, in Bethlehem, began in 2013, and saw the collaboration between the three ecclesial communities (Greek Orthodox, Armenians and Franciscans of the Custody) who have specific rights and property over the church, regulated by the Status Quo. The work involved around 400 restoration experts and specialized personnel, to bring back to the ancient splendor the sacred place that UNESCO had included among the historical buildings at risk, for the damage that above all the atmospheric agents had produced in the roof and in the wooden structures that support it. (GV) (Agenzia Fides, 7/12/2019)