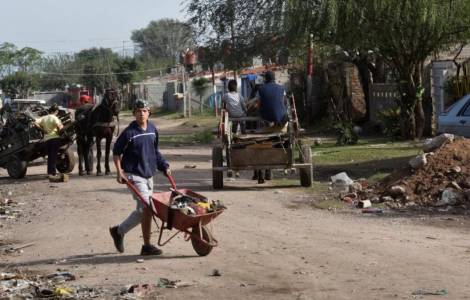 2021-06-12
Entire families suffer and die without assistance: the annual collection of Caritas on 12 and 13 June

2021-03-24
Bishop and priest ask for more security: many parishes affected by the increase in violence

2021-03-09
Combat killings linked to the victim's gender through integral education based on the dignity of women, protection of life and gender equality

Buenos Aires (Agenzia Fides) - The Bishops' Commission for social pastoral care, presided over by Mgr. Jorge Rubén Lugones, SJ, Bishop of Lomas de Zamora, on Wednesday, December 4 received the representatives of the "Mesa de dialogue por el trabajo y la vida digna "(Table of dialogue for work and dignified life), an association that includes the main sectors of work, production and social economy. Less than a week after the inauguration of the new President, Alberto Fernández, who will take office on December 10th, the Argentine Church wanted to present itself as a reference point for a possible social pact that deals with the poorest.
According to the information sent to Agenzia Fides, the meeting was attended by representatives of the most important social groups: industrialists, workers, social economy, cooperative sector ... Everyone agreed on the fundamental importance of the work carried out by social Pastoral to give life to this meeting space, dialogue and proposals, which also enabled us to reach an institutional exit from the enormous economic and social crisis that runs through the country. The meeting addressed the difficult situation of democratic institutions in Argentina and highlighted the importance of coordinating the network created around the Mesa. In conclusion, the representatives of Bishops' Conference proposed to develop and formalize a social pact to assist the poorest.
The meeting took place at a very delicate time for Argentina, which reached a negative record: in the third quarter of 2019 40.8% of the population is classified as poor, according to the Social Debt Observatory of the Catholic University of Argentina (UCA), which specified that poverty also progressed, reaching 8.9%.
These are the highest percentages recorded in Argentina in the last decade, and that "the last year of management of outgoing President Maurizio Macri closes with 2.8 million new poor", reports the daily newspaper Financiero, a specialized financial newspaper in the field. In other words, four out of ten Argentines are poor, which means 16 million people.
The UCA report notes that the reasons for the new social situation are due to the economic crisis, which has worsened this year, with a new devaluation of weight, an inflation that will close 2019 around 54%, in addition to the fall in wages and to recession. A significant point in the study of the UCA: the increase in poverty in the Argentine middle class, which has grown a lot over the last two years. In 2017 it was 4.9%, rising to 8.1% the following year and almost doubled in 2019, reaching 14.2%. (CE) (Agenzia Fides, 6/12/2019)

ASIA/LEBANON - Synod of the Maronite Bishops: "The supply of the Lebanese population is at risk"

ASIA/SOUTH KOREA - Cardinal Yeom: Bishop You to the Congregation of the Clergy is "a great gift"