AMERICA/PARAGUAY - Complaints and hopes of young Paraguayans at the end of the Youth Triennium: "Yes to life, yes to Jesus" 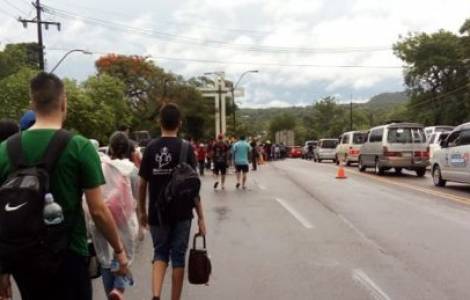 2019-12-07
Jesuit Bartomeu Melià, great expert in language and culture of the Guaraní indigenous people, has died

2019-12-05
Complaints and hopes of young Paraguayans at the end of the Youth Triennium: "Yes to life, yes to Jesus"

2019-11-20
Violence in Latin American countries: Bishops call to "pray and work for peace"

2019-11-07
The Archbishop of Asunción: increasing the salaries of politicians instead of supporting the poorest is "immoral"

Caacupé (Agenzia Fides) - "We cannot remain ignorant to the different realities that influence the lives of many Paraguayans, for this reason, as young people we denounce: the corrupt attitude of many political leaders who do not listen to citizens, lacking respect for the dignity and the right of every Paraguayan; people are tired of those who are just trying to fill their pockets at the expense of humble and hard-working people". This is a passage from the "Youth Pastoral Manifesto", published at the end of the Youth Triennium celebrated by the Church of Paraguay from 2017 to 2019 (see Fides, 9/11/2019) which ended with a pilgrimage to the Sanctuary of the Lady of Caacupé on November 30, where young people from all regions of the country gathered.
In the text of the Manifesto, sent to Agenzia Fides, the young people complain that "justice has become a corrupt instrument and managed by political and economic powers, used in favor of private interests"; they also believe that "public health is a fundamental right and not just a privilege of some, so it hurts to see children who die from neglect, lack of medicines or necessary equipment, as well as many people who die on the streets in search of attention. It is sad to see how many hospitals in our country are collapsing and are without supplies".
Violence, drug trafficking and insecurity prevail in the Country, where no citizen is safe, the youth Manifesto continues, denouncing the absence of those who should guarantee public order and the threat of armed groups. Even environmental laws remain on paper, and the country suffers a profound daily deforestation.
Faced with this situation, young Paraguayans express their desires: the rulers have to be attentive to the needs of the population and remember that they are at the service of all citizens; have to promote policies that generate jobs for young people so as not to force them to emigrate; "Human life is the absolute priority, taking care of and protecting the health of every Paraguayan from conception to death"; the family, as the foundation of society, is no longer the object of violence and feminicide.
They also demand effective public security measures for all citizens, as well as investigating those who exploit farmers and indigenous people, "forcing them to leave their homes and lands, migrating to the cities, where they create pockets of poverty that are exploited for political clientelism".
The young people of Paraguay pray for peace in Latin America, "so that t rulers may be wise and listen to the needs of their peoples, in order to restore order and peace to our brother countries". They also encourage everyone, "as young people and lay people, to be protagonists in building a better society, to bring about transformation in Christ, always in search of the common good". The Manifesto finally urges all young people "not to be deceived by the false idols of this world as addictions, materialism and an easy life, because the only one who can give a real meaning to life is Jesus, because He lives and loves you alive, he calls and waits for you always, therefore, young people, say yes to life, say yes to Jesus". (S.L.) (Agenzia Fides, 5/12/2019)