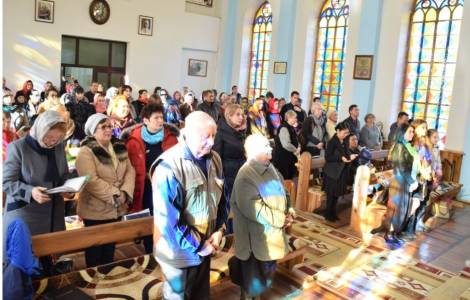 Tashkent (Agenzia Fides) - The Catholic community of Uzbekistan has launched a collection of signatures to ask the government to register, and therefore authorize, to open a new church. The Franciscan Friar Apostolic of Uzbekistan, Fr. Jerzy Maculewicz, informed that a large number of faithful, from an already authorized religious community is necessary in order to start the paperwork. "In the city of Angren, about 90 km from Tashkent, there is a group of about 25 faithful - says the Administrator - who join us every Sunday in the capital to participate in the holy mass. We try to support them by paying for their journey, but now we would like to have a place, a room or a chapel where we can celebrate Mass in their city too. We hope to succeed soon. Should the government accept the request, we priests would go there every Saturday, in turn, to Angren to celebrate the Eucharist and the other sacraments. We always do everything possible to be close and serve the people who go to our parishes", explains the Franciscan.
At the moment, points out Fr. Maculewicz, the faithful are 25, "but I believe that, having a stable base in Angren, other people would attend. The Uzbek Catholic Church is growing, and it is a good moment in general: this government supports and does not impede religions. Even Protestant Christians have registered new communities and have encouraged me to do the same".
Meanwhile, in the various Uzbek parishes, the month of November was completely dedicated to prayer for the dead, while the community started the "Advent" period with fervor and devotion: "We prayed for our loved ones throughout the month: every faithful was able to leave a list with the names of the dead and every day we addressed our prayers to God for their souls. Now we are immersed in prayer and preparing for Christmas".
The Uzbek Constitution contemplates freedom of religion. By law, all religious groups must register with the Ministry of Justice. In 2018 Parliament approved a provision that simplifies the rules for the registration of religious organizations and the opening of new halls for worship. The government also established a special advisory body, the "Council of Faiths", in charged of relating to the 17 recognized religious groups. With the approval of these new rules, official church registrations are on the rise in Uzbekistan. In 2018, eight years after the last concession, the government authorized a new one run by a presbyterian religious community in Chirchick, near Tashkent. Three new Protestant churches were authorized in September 2019 and five other practices are being finalized. The increase in authorizations granted indicates a climate of greater religious freedom for Christians, according to the political direction given by the government of President Shavkat Mirziyoyev, elected in December 2016.
Out of 30 million inhabitants, the Uzbek population is 90% Muslim. About 3.5% are of Russian Orthodox Christian faith, while another 3% include small Christian communities of other denominations, including Catholics. In particular, the Catholic presence in Uzbekistan is made up of about 3,000 baptized, distributed in the five local parishes: to the approximately 700 faithful active in Tashkent, there are others present in Samarkand, Bukhara, Urgench and Fergana. (LF) (Agenzia Fides, 3/12/2019)